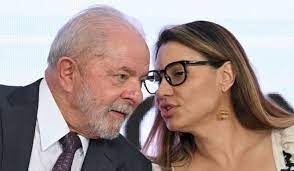 BRASILIA (AFP): As Brazil’s new government held its first meeting Friday, the new first lady got down to business too, dealing with what she called major damage, leaks, and missing artwork and furniture at the presidential palace.

First Lady Rosangela “Janja” da Silva gave Brazil’s biggest broadcaster, TV Globo, a tour of the Alvorada Palace, the presidential residence in Brasilia, to highlight what she described as its shoddy condition at the end of far-right former president Jair Bolsonaro’s four-year tenancy.

She showed the camera crew torn rugs, damaged floors, a broken window, a ceiling stained by water leaks, a massive banquet hall left bare of furniture and other issues that would leave normal outgoing tenants nervous over getting their deposits back.

An unknown amount of furniture and artwork from the official residence was missing, damaged or — in the case of one 19th-century work — left on the floor, she said.

Electronic equipment was meanwhile left strewn around the library where Bolsonaro used to give his weekly social media live addresses to his far-right base.

Da Silva, 56, said the first couple would carry out renovations to repair the damages and a full inventory of the residence’s furniture and art before moving in.

“This building is on the national register of historic places,” she told TV Globo.

“We’re thinking of adding the things that are inside it (to the register), too, so this doesn’t happen again, where a president comes and takes historic items that belong to the Brazilian state.”

Lula, 77, knows the palace well, having lived there during his first presidency (2003-2010) with his late wife Marisa Leticia.

His Workers’ Party (PT) occupied the sleek white Oscar Niemeyer-designed building from 2003 to 2016, when his hand-picked successor, Dilma Rousseff, was impeached.

Lula, who survived being jailed on controversial corruption charges to regain the presidency Sunday, now returns to the palace after the tenancies of center-right ex-president Michel Temer and Bolsonaro.

Bolsonaro, who left Brazil for the US state of Florida on the second-to-last day of his term, could not be reached for comment.