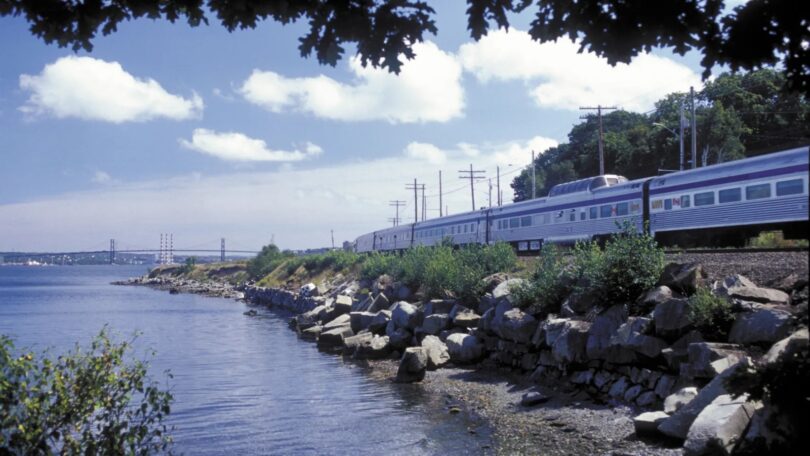 Travelling while lying comfortably in bed isn’t easily achievable in concept, but it’s one of my favourite ways to traverse the globe. Who doesn’t love being able to put their feet up and enjoy a glass of wine all while making headway towards their next destination?

The moment I realised I could experience everything I love about business-class flights for a fraction of the price – and travel more sustainably in the process – I was converted to train travel for life. The VIA Rail Montreal to Halifax train (the Ocean line) is the oldest continuously operating passenger train in North America, having transported people between Halifax and Montreal for more than 100 years.

While the Ocean isn’t the opulent Orient Express or Rocky Mountaineer, it’s almost a metaphor for Nova Scotia – scrappy but comfortable. Compared to flying, the overnight route is often considered a budget-conscious way to travel the 1,300km between Nova Scotia and Quebec; but for those in the know, booking one of the relatively affordable luxury sleeper cabins (a sleeper cabin is only about C$700) offers a nod to the luxurious train travel of yesteryear.

The onboard chefs create dishes that pay homage to the local Acadian culture, while attendants scurry from cabin to cabin, ensuring everyone is comfortable and has enough refreshments to last the 24-hour journey. The lack of reliable WiFi or cellular service for most of the trip allows you to focus on the endless Canadian landscape. And there is even a full-sized shower on board for sleeper-cabin passengers: something usually only offered on multi-thousand-dollar business-class flights.

The train passes through the New Brunswick countryside on its route between Halifax and Montreal (Credit: Joshua Davenport/Alamy)

Checking into my cabin on a recent trip across Atlantic Canada, I was struck by the cosiness of it all. Private cabin passengers board the train first, so I had the chance to settle into the roomy sleeper before the train chugged into motion. I climbed the two steps into my room and felt a smile spread across my face: my solo traveller suite was only about twice the size of a standard airplane business-class pod, but the massive window spanning the length of the cabin, combined with a sliding, lockable door, made me feel like I was traversing Canada from the comfort and security of a hotel room.

The Ocean, which was opened on 3 July 1904 by the Intercolonial Railway of Canada (IRC) was originally intended to serve as a supplemental line to the now-defunct Maritime Express railway service as a summer-only limited-stop service. Still, it quickly became obvious, as immigration from Britain and Northern Europe increased, that the route between Atlantic Canada and Quebec would turn out to be vital for passengers looking for a quick and modern way to connect to the Canadian Pacific Railway and Grand Trunk Railway lines further into the west.

Soon, the Ocean was running into the winter (and throughout the rest of the year), providing the easiest form of transportation for eastern Canadians embarking on winter-time activities in Alberta and British Columbia. Incredibly, the passenger line has continued running regular service since its inception, seeing the country through the 1918 influenza pandemic and serving as a key transport during World War One and Two, moving vital services and gear from central Canada to the Port of Halifax.

Today, the train still follows the original IRC route, chugging through two time zones and three provinces. In fact, not much has changed since its inception a century ago, with the contemporary journey retaining much of the original comfort and charm – from the cabin attendant service to the local-focused dining car menu.

After boarding the train in Halifax, I spent the first few hours of the journey mesmerised by the constantly shifting landscape outside my window. I was born and raised in Nova Scotia, but I never tire of the sights and sounds of the Halifax waterfront and Atlantic Ocean coastline: the subtle taste of sea salt in the air; the way the sun cuts through the permanent overcast; and the slow-bobbing ferries and tugboats. The oceanfront landscape eventually transformed into rows upon rows of Balsam fir, yellow birch and red maple trees as we made our way out of central Nova Scotia and crossed the provincial line into New Brunswick.

Eventually, I found myself anxious to explore beyond my cabin, so I made my way to the Ocean line’s dining car, which is reserved for sleeper cabin passengers with four different services scheduled for the journey – two at lunchtime and two for dinner. The semi-private dining car made it easy to imagine the history of this 100-year-old train route. With white-linen tablecloths and deep-red, cloth-backed dining chairs juxtaposed against the oversized windows and built-in table lamps, old-world luxury still shone through. It came as a massive upgrade to the pre-packaged takeout window I had experienced as an economy passenger on previous trips.

The multi-course dinner menu was inspired by the Acadian connection to the Maritime provinces of New Brunswick, Nova Scotia and Prince Edward Island, with each dish rooted in traditional Maritime fare and designed to look like something you’d find on an average Nova Scotian supper table. I chose from rotating locally focused menu items such as pan-fried haddock with boiled potatoes, minted peas and sweet pepper cream sauce, and clam chowder with crusty bread – all paired with Canadian red and white wine by the glass or bottle.

The 24-hour route allows passengers to immerse themselves in the coastal Canadian landscape (Credit: VIA Rail)

The sun set as we travelled through the thick New Brunswick forest during dinner – which made it easier to wind down and get ready for bed since I no longer had access to the oil painting-worthy Canadian landscape out of the window. The sleeper cabin attendants used the dinner service time to turn down each cabin, and when I returned to my room after the meal, I was delighted to see the couch I had left behind transformed into a twin-sized bed complete with fresh sheets, two pillows and a plush hotel-quality blanket.

Each sleeper has access to a full-sized shower at the end of the hall and includes an amenity bag equipped with soap, shampoo and a standard hotel-style towel. I was pleasantly surprised by the water pressure and shower temperature; the hot and steamy stream of water was exactly what I needed before changing into my pyjamas and allowing myself to be lulled to sleep by the steady chugging of the train.

I woke early to experience the joy of catching the Southern Quebec sunrise from the comfort of bed. I stretched out and savoured my surprisingly tasty drip coffee while marvelling at the way the morning light flicked its way through the thick fir trees alongside the train tracks. The morning segment of the trek took me through the forests and farmland dotted throughout the Quebec countryside and into the suburbs of Quebec City before rolling to a stop at Montreal’s Gare Centrale by noon local time.

Although the slow burn of a 24-hour train might seem redundant or expendable today, the slower pace of the Ocean line – combined with the unmatched convenience of travelling from downtown Halifax to downtown Montreal without worrying about banalities like airport security or highway traffic – gifted me the chance to fully immerse myself in the coastal Canadian landscape. As I got off the train, I felt grateful for the opportunity to experience the vastness of the region and get a glimpse of the in-between spaces and places that travellers often miss.