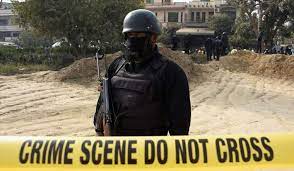 ISLAMABAD: The Islamabad police have issued special security plan amid possible threat of a terrorist attack following the suicide bombing in the I-10 Sector.

According to the security plan unveiled by Capital police, temporary security check posts have been established at 25 different locations in Islamabad while Safe City cameras will record Red Zone entrances. The video of passengers travelling via metro bus service would also be recorded, the police said in a statement.

The police have further advised citizens to register tenants and employees at the nearest police station. “Citizens employing unregistered local or foreign workers will also be investigated,” the police statement read.

The security plan comes three days after a policeman was martyred and six others, including four fellow cops, had been injured in a suicide blast reported in Islamabad’s I-10/4 sector. The slain officer was identified as Head Constable Adeel Hussain.

The security alert advised incoming Saudi residents and those in the country to “be cautious” and not step out except for any necessity. “Security of Islamabad has been placed at the highest level,” the alert said, adding that Saudis should contact the embassy and consulate if the need arises. Meanwhile, Australia has updated its travel advisory for Pakistan, noting that “Australian officials in Islamabad have been advised to increase vigilance and limit travel within the city.” (INP)