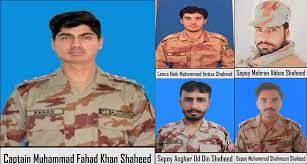 RAWALPINDI: Five including a captain of Pakistan Army embraced martyrdom when an improvised explosive device (IED) exploded during an intelligence based operation (IBO) conducted by the security personnel in Kahan area of Balochistan, Inter Services Public Relations (ISPR) said.

According to military’s media wing, a clearance operation based on credible intelligence was underway in Kahan area of Balochistan since December 24.

The ISPR said that these army personnel embraced Shahadat while laying their lives in defence of the motherland against an externally perpetrated threat of terrorism.

Such cowardly acts by inimical elements could not sabotage the hard earned peace and prosperity in Balochistan, it added.
“Security forces remain determined to challenge their nefarious designs, even at the cost of blood and lives. The sanitization Operation continues in the area to apprehend perpetrators,” the ISPR said. (INP)