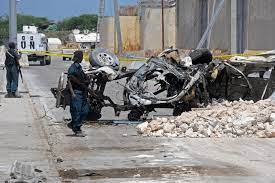 Al Qaeda affiliate al Shabaab has been waging an insurgency against Somalia’s government since 2007. It was pushed out of Hiraan last year by government forces and allied clan militias known as macawisley, but has continued to stage attacks.

“We were awoken this morning by two huge explosions,” Ahmed Nur, a local elder, said. “We have seen many houses levelled to the ground. At least 10 people died including civilians, soldiers and macawisley fighters.”

Mahas district commissioner Mumin Mohamed Halane told state radio that one bomb targeted his house and the other hit the home of a federal lawmaker.

The insurgents have been under pressure since August when President Hassan Sheikh Mohamud launched a military offensive shortly after coming into office.

The government forces and macawisley have received support from United States and African Union troops.

The government says it has killed hundreds of al Shabaab fighters and recaptured dozens of settlements, although different sides often give conflicting accounts of clashes.

Despite the offensive, al Shabaab has carried out frequent attacks in recent months, including several in the capital Mogadishu against government installations and hotels.