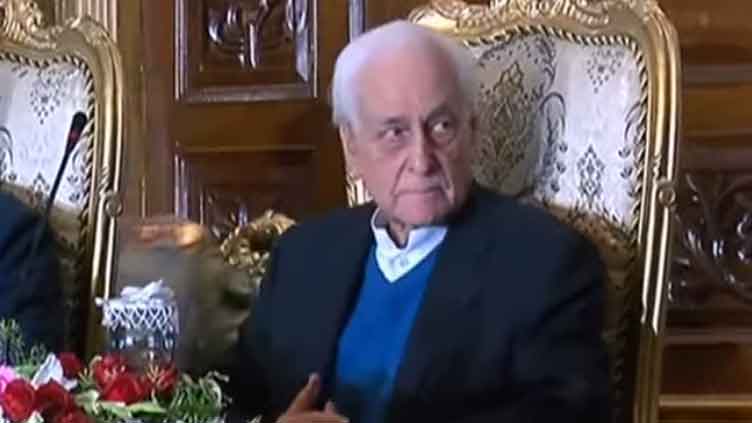 F.P. Report
PESHAWAR: Caretaker Chief Minister Khyber Pakhtunkhwa Muhammad Azam Khan chaired an important meeting to review the overall law & order situation, economic conditions and financial issues of the province. Chief Secretary Khyber Pakhtunkhwa Dr. Shehzad Bangash, IGP Muazzam Jah Ansari, Principal Secretary to CM Amjid Ali Khan, administrative secretaries of concerned departments and other relevant police officials attended the meeting.
The caretaker Chief Minister Muhammad Azam Khan decided to take up the financial issues and matters related to the law & order situation of the province with Prime Minister of Pakistan and said that he would have formal meeting with the Prime Minister in the next couple of days to apprise him of the aforesaid issues of the province.
He termed the current law & order situation and financial issues of the province as of concern and added that his government will go all out to resolve these issues on priority and every possible effort would be made to get the cooperation of Federal Government in this regard.
Muhammad Azam Khan also termed the prevailing law & order situation in the province especially the increases attacks on police as a matter of great concern, and said that the caretaker set up of the province will pay special attention to law & order situation and all available resources would be utilized to improve the situation to the desired level. He said that in view of the prevailing law & order situation of the province, the matter regarding strengthening of police department specially the Counter Terrorism Department would be taken up with the federal government. The meeting decided in principle to review the existing mechanism of deployment of police guards with ex-public representatives, ex-bureaucrats and other individuals and the quarters concerned were directed to come up with proposals to this effect to be presented to the caretaker cabinet for approval. It was told in the meeting that currently, more than 4000 police personnel were deployed as security guards with various individuals including ex-public representatives and ex-bureaucrats.
The caretaker Chief Minister made it clear that in view of the current law & order situation, the provincial government would not afford to spare such a huge number of police for the security of individuals, however, police guards would be provided to those who really need it, he remarked.
He appreciated the role of KP Police in maintaining law & order in the province and said that police are fighting against militancy on the front line and they have rendered huge sacrifices for this purpose. He urged upon the public to have close eyes on anti-social elements around them, and to extend support to police in this regard.
Meanwhile, the participants were briefed in details about the overall law & order situation in the province, initiatives so far taken by the police department to maintain law & order and future course of action to deal with the situation. It was informed that during the year 2022, a total of 494 terrorist incidents had been reported across the province. As many as 119 police personnel were martyred and 112 injured in terrorist attacks during the last one year.
Briefing about the actions taken by the police department during the last one year, it was told that more than 21000 search and strike operations were conducted and over 33000 suspects were detained. Similarly, during the snap checking, over 125000 suspects were arrested. It was further informed that during search operation of houses, residential apartments, hotels, public transport terminals and other sensitive and vulnerable places, over 15000 FIRs were logged against the suspects.
The forum was further informed that during the last one year, 812 terrorists were arrested in anti-terrorist activities by the counter terrorism department. Similarly, more than 62000 weapons were recovered during the year 2022. It was informed that the KP Police Department is taking every possible step to deal with the challenges adding that the coordination with law enforcing and intelligence agencies is being enhanced whereas steps are also being taken to enhance the police visibility, community mobilization and installation of CCTV cameras at vulnerable places in order to effectively deal with the situation.