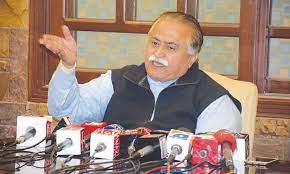 “It is expected from the JI Ameer that he will take a political decision [regarding the new mayor of Karachi], keeping in view the current political situation in the country,” he said while addressing a news conference here.

He said the political situation in the country would have improved further, if all political parties had participated in the local bodies’ election in Karachi to respect the mandate of each other.

He asked the Jammat-e-Islami to respect the mandate of the people of Karachi who had given the decision in the favor of Pakistan Peoples Party in the local body’s elections. The former senator said Pakistan Tehreek-e-Insaf Chairman Imran Khan’s politics had no future in national politics due to his political-immaturity and rigidity.

He urged the political forces in Karachi not to push the metropolitan into ‘fire and blood’ again. “Karachi is the business hub and its peoples have desired peace, progress and development,” he added. Maula Bakhsh Chandio regretted that an attempt was being made for a quite some time by anti-state elements to create chaos and anarchy in the country, and vowed to foil any such nefarious design by the democratic forces at every level.

“The PPP is a true democratic party, and we had suggested all political parties to participate in the LG polls to strengthen the democratic norms in the country and empower the public representatives at the grassroots level,” he added. “If any conspiracy is hatched against PPP [after the LG polls,] it will be taken as a conspiracy against democracy.

The PPP has emerged a largest single party in the province and its mandate should be respected,” he remarked. (APP)