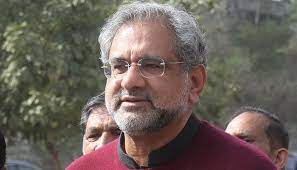 ISLAMABAD: Former prime minister and PML-N leader Shahid Khaqan Abbasi on Wednesday said that the government’s tenure can only be extended in extra-ordinary circumstances.

Talking to a private TV channel, he said, “Such step without exceptional situation will not be a positive measure,” he said. “We are fond of talking about some points, ‘technocrat setup’ is one of them,” Abbasi said. “As a politician it is my duty to oppose all undemocratic and unconstitutional acts,” former prime minister said.

“Assad Qaisar should disclose who had given him the message about a ‘technocrat setup’, PML-N leader said. “He should give the name, if technocrat setup suggested from the platform of PML-N, I will oppose it,” he said. “Nothing has been discussed about a technocratic setup within our party,” he added.

“How truth could be expected from a speaker who violates the constitution,” PML-N leader said. “We always search for miracles but there is no miraculous solution of the issues of the country,” he said.

“Decisions taken so far are nothing, we have to continue a long process of difficult decisions,” he added. (INP)