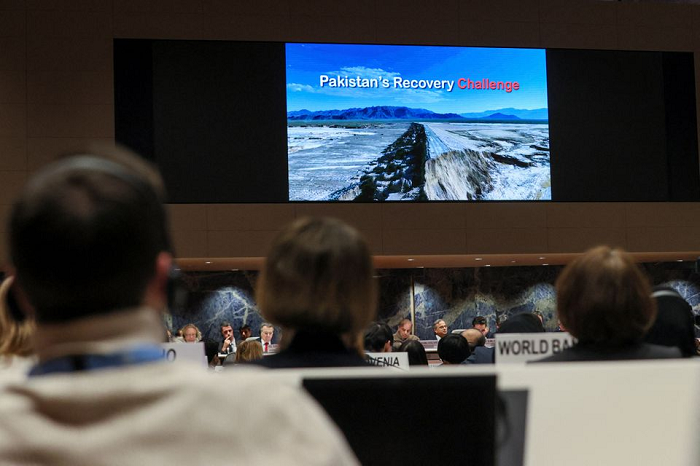 GENEVA (APP): The International Conference on Climate Resilient Pakistan, co-hosted by the Government of Pakistan and the United Nations in Geneva, Monday called for securing global support and forging long-term partnerships to help the country cope with the challenges of devastating floods of 2022. The conference brought together governments, leaders from the public and private sectors and civil society to support the people and the government of Pakistan to deal with the enormous challenge of post-flood reconstruction and rehabilitation.
Prime Minister Shehbaz Sharif and UN Secretary-General Antonio Guterres, flanked by Foreign Minister Bilawal Bhutto Zardari relayed the call for supporting the needs of 33 million people displaced by the country’s worst flood disaster. Shehbaz Sharif in his address mentioned Pakistan’s Resilient Recovery, Rehabilitation, and Reconstruction Framework (4RF), which laid out a multisectoral strategy for rehabilitation and reconstruction in a climate-resilient and inclusive manner
As per estimates, the devastating floods in 2022 left one-third of the country submerged, about 15,000 dead or injured and 8 million displaced. Over 2 million homes, 13,000 kilometres of highways, 439 bridges and more than 4 million acres of agricultural land were destroyed or damaged. An estimated nine million more people could be forced into poverty as a direct consequence of these floods. The prime minister said with the support of the United Nations, the World Bank Group, the Asian Development Bank, and the European Union, Pakistan had prepared a Post-Disaster Needs Assessment (PDNA), which estimates flood damages to exceed US$14.9 billion, economic losses over US$15.2 billion and reconstruction needs over US$16.3 billion.
He expressed profound gratitude to Secretary-General Guterres for co-chairing the conference and for his continued support for the people of Pakistan suffering in the aftermath of the floods. He recalled visiting along with Guterres the flood-affected areas of Sindh and Balochistan in September and said that the people of Pakistan would never forget this gesture of the UN Secretary-General. He stressed that the question was not only about how to survive, but how to maintain dignity and honour by moving forward with a sense of purpose and achievement.
Shehbaz Sharif said floods disrupted the education of 2.6 million including one million girls. “We are racing against time,” he said, stressing that relief work needed to continue as some areas of Sindh needed drainage of water. He mentioned that the broad contours set up in the 4RF plan reflected priority for recovery and reconstruction, with a minimum requirement of $16.3 billion.
He said resilience was required to recover from colossal damages and ensure a sustainable future for the livelihood. “Pakistan needs a new coalition of the willing to save lives,” he said, urging solidarity and long-term support to the people of Pakistan to renew their hope. UN Secretary-General Antonio Guterres said floods affected millions of people in Pakistan with immense losses to agricultural land and infrastructure. He recalled meeting the men, women and children at the makeshift camps in the flood-hit areas of Pakistan and said it was heartbreaking to witness their sufferings in the wake of climate-induced disaster.
“The UN is at the frontline of addressing the catastrophe in Pakistan and stressed improvement in infrastructure,” he said. “The UN will be there to help in critical and colossal losses.” He said the climate crisis needed massive support and mentioned that the people in South Asia were 15 times more likely to die with the impact of such natural disasters. FM Bilawal said Pakistan looked forward to international support and assistance as a major climate disaster affected one in seven of the country’s population.
He highlighted that a large area of Pakistan was inundated with water and emphasized that the international community needed to come together and join the comprehensive plan presented by Pakistan on post-flood reconstruction. French President Emanuel Macron in a video-link address offered full support from the government and people of France to Pakistan in their hour of difficulty. Turkish President Recep Tayyip Erdogan said Turkiye stood by the people of Pakistan in overcoming its flood damages. He mentioned that the country sent 15 planes and two ships carrying humanitarian aid supplies for the flood-struck people of Pakistan.
He stressed intense efforts and more collaboration to address the climate crisis, adding that Turkiye continued to be in contact with the Pakistani authorities. In his video statement, Prime Minister of Norway Jonas Gahr Støre said the the catastrophe had caused a matchless damage to Pakistan. He said as the needs of the flood-hit people remained enormous, the international community should take collective actions to address the challenge of the climate change and support its victims. He said Norway would continue to joining the international community for the cause.
President of the European Commission Ursula von der Leyen calling the conference a timely initiative said 2022 was a difficult year for the world owing to the pandemic as well as the worst flood hitting Pakistan, putting pressure on the vulnerable people. She said the scale of the flood-caused devastation was enormous as millions of people remained underwater for months and the children faced a shortage of food. She said the conference was meant to adopt an ambitious plan to help Pakistan put on the path to recovery.
Federal Councillor for Foreign Affairs of Switzerland Ignazio Cassis said the international community should support Pakistan in that hour of need. He said climate change was a global risk which necessitated global actions. He thanked Prime Minister Shehbaz Sharif and UN Secretary-General Antonio Guterres for holding the moot and recalled the Swiss support to Pakistan soon after the floods including sending a team for relief and reconstruction.