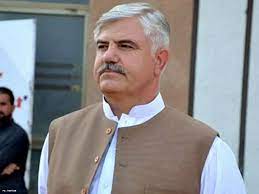 F.P. Report
PESHAWAR: Chief Minister Khyber Pakhtunkhwa Mahmood Khan has formally performed the ground breaking of three mega development projects in Peshawar under the Khyber Pakhtunkhwa Cities Improvement Project (KPCIP) which would be completed at an estimated cost of Rs.4 billion cumulatively. These projects include Improvement and Rehabilitation of Water Supply System, extension and improvement of Bagh-e-Naran Park and establishment of Besai Park at Hayatabad Peshawar.
The inaugural ceremony of the projects was held at Bagh-e-Naran Peshawar on Wednesday with the Chief Minister Mahmood Khan as the chief guest. Provincial Ministers Faisal Amin Gandapur, Taimur Saleem Jhagra Ishtiaq Urmar, members of provincial assembly, Commissioner Peshawar and high ups of relevant provincial departments also attended the ceremony.
According to the details, the Chief Minister laid the foundation stone of a mega project regarding Improvement & Rehabilitation of Water Supply System in Peshawar which would be completed at an estimated cost of Rs. 2.8 billion. Under the project, multiple construction and rehabilitation activities would be carried out including Rehabilitation of existing Overhead Water Reservoirs, Construction of New Water Reservoirs, replacement of 155 Km long water distribution network and installation of new household connections and water meters. Reconstruction and rehabilitation of tube wells linked to the overhead water reservoirs and solarization of the existing tube wells is also a part of this project. Similarly, the extension of Bagh-e-Naran would be implemented at an estimated cost of Rs. 535 million under which multiple facilities including jogging and cycling tracks, skating zone for the children, open air gym, recreational facilities, family area and playground would be established. Besides urban foresting, rose garden and provision of other allied facilities are also included in the project.
Addressing the groundbreaking ceremony, the Chief Minister said that Cities Improvement Project is worth Rs. 130 billion which on completion would prove to be a game changer in streamlining the municipal services and allied facilities in the major cities of the province. He added that after untiring efforts for four years, the project has been put on ground. He made it clear that the provincial government has framed its development strategy keeping in view the available resources and requirements of general public in the different regions of the province. All the commitments made by PTI Chairman Imran Khan are being fulfilled one by one, he said and added that the provincial government believes in the investment on human capital and improving the quality of life for its citizens.
Mahmood Khan stated that the incumbent provincial government has established a model of sustainable development in the province with special focus on Peshawar which is the back bone of the province.
The government is also working to make this province a hub of trade and transit in the region for which work on various motorways has been initiated. Construction work has started on Swat Motorway Phase-2 after the successful completion of Phase 1. Furthermore, the Dir motorway followed by linking of Chitral and Gilgit Baltistan through road networks will prove to be a major game changer in promoting tourism and making the province a center for regional trade and commerce.
Similarly, physical work on Peshawar to DI Khan motorway will also be initiated soon which will ensure development of the southern region of the province. Steps are also being taken for food security for which the Chasma Right Bank Canal (CRBC) deserves special attention. The completion of the CRBC will bring hundreds of thousands of acres of barren land under cultivation.
Criticizing the incumbent federal government, Mahmood Khan clarified that ever since the regime change at federal level, financial constrains are being created for the provincial government and the budgeted share is being withheld. Out of the development budget of Rs 55 Billion for the merged districts, only Rs 5 billion has been provided so far whereas out of the current budget of Rs 85 Billion, only 60 Billion has been released. The outstanding amount has reachd Rs 189 Billion as of December.
The Chief Minister maintained that if the attitude of the federal government persists, people of Khyber Pakhtunkhwa will hold massive protest in front of the national assembly for their due rights.