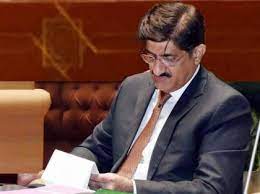 KARACHI: Sindh Chief Minister Syed Murad Ali Shah, after attending a donors’ conference in Geneva, returned on Wednesday morning, held a meeting regarding price control of flour, and directed the food department to ensure Rs 95 per kilo grams price in the open market and at Rs 65 per kilo of subsidies wheat flour.

Minister Food Mukesh Kumar Chawla told the CM that his department was releasing 8000 tons to 12000 tons of wheat daily and added the wheat stocks to meet the province’s wheat requirement till the end of February were available. The chief minister said that if the food department was releasing enough wheat then why was the price not coming under control.

Syed Murad Ali Shah categorically directed the food department to control the atta prices, fix it at Rs 95 per kg in the open market, and keep providing subsidised atta at Rs 65 per kg.

Giving details of the available stocks in the province, the food minister said that over 618,569 tons of wheat was available.

He added that these stocks were enough to meet the province’s requirement till the end of February and from the first week of March new crops would start pouring into the market and the prices would go down automatically.

The chief minister directed the chief secretary to further activate district administration in controlling the prices of not only flour but other commodities such as vegetables, fruit, chicken, beef, mutton, eggs, and pulses. (APP)