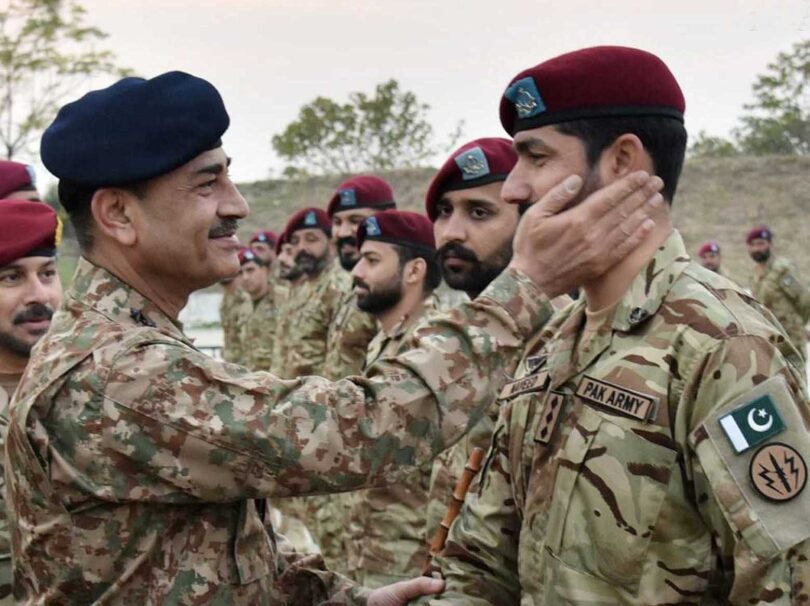 RAWALPINDI (NNI): Chief of Army Staff (COAS) General Syed Asim Munir visited Miranshah – North Waziristan and Tarbela on Friday. At Miranshah, the COAS laid a floral wreath at the Martyrs’ Monument to pay homage to brave soldiers who laid lives while defending the motherland, the Inter Services Public Relations said in a statement today.
The COAS was briefed by field commanders on the latest security situation in the area and response mechanisms to thwart the terrorist threats.
The COAS also visited frontline troops deployed along Pakistan and Afghanistan border and interacted with officers and men.
The COAS commended their professionalism, high morale, and operational readiness.
The COAS said that Pak Army remains focused on evolving security situations and is determined to take the battle to the terrorists and break nexus with their facilitators so as to ensure lasting peace through socioeconomic development.
Pakistan Army will consolidate the hard-earned peace, made possible by the supreme sacrifices of the resilient Pakistani nation and Law Enforcement Agencies (LEAs).
Later, the COAS also visited HQ SSG Terbela and met officers and men including the elite Zarrar Company whose soldiers gallantly acted in the recent Bannu CTD complex operation as well as Aviation.
The COAS praised their indomitable spirit, sacrifices, and commitment to duty in various operations. The COAS said that SSG is the pride of the Nation and it had proved its metal over the years. Earlier on arrival, the COAS was received by Lieutenant General Hassan Azhar Hayat, Commander of Peshawar Corps.