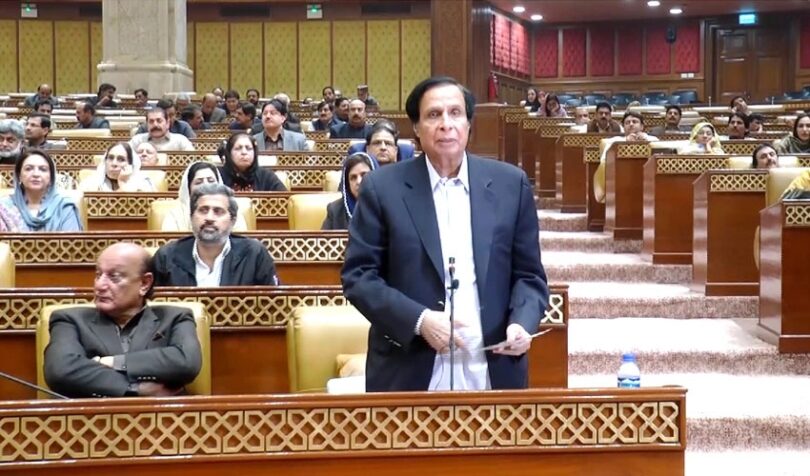 LAHORE (NNI): Punjab Chief Minister Chaudhry Parvez Elahi has said that this government will remain in place no matter what the enemy does. Speaking in the Punjab Assembly on Friday, he said that Allah created this government and He will maintain it. Will continue to serve the religion. Imran Khan and I have been blessed by Allah to serve the religion.
“I thank Allah Almighty for passing the Khatam-ul-Nabin University and the Quran Act Bill by the Punjab Assembly. I thank Speaker Punjab Assembly Sabtain Khan, PTI, PML-Q and PML-N members of the assembly for unanimously passing the bill” he added. He said that in all public and private schools, the teaching of Nazra Quran has been made compulsory up to FA.
The CM Parvez Elahi further said that the approval of the Punjab Public Defender Service Bill to provide free legal aid to the common man is also a historic step. With the approval of this bill, the Punjab government will provide free legal aid to the common man. A thousand new jobs will be created.
During the Punjab Assembly session, the House became a fish market, the opposition strongly protested against today’s action, and also surrounded Spikerdice. Opposition member Rana Mashhood said that we will not allow the sanctity of the constitution and law to be violated. The bill for the Khatam-ul-Nabi University in Punjab was passed amid noise, while the resolution against the governor was also passed.
Earlier, the Lahore High Court (LHC) Friday restored the provincial cabinet and Parvez Elahi as the chief minister after he assured the court that he would not dissolve the Punjab Assembly once regains control of the office.
The LHC wanted an undertaking from Elahi that he would not dissolve the assembly as if he would resort to the move, it could deepen the ongoing political turmoil in the province.
Punjab Governor Baligh-ur-Rehman de-notified the Pakistan Muslim League-Quaid (PML-Q) leader as the chief minister as he did not take a vote of confidence despite the passage of several hours.
A five-member bench — headed by Justice Abid Aziz Sheikh and including Justices Justices Chaudhry Muhammad Iqbal, Tariq Saleem Sheikh, Asim Hafeez and Muzamil Akhtar Shabir — heard the case. The court took two breaks — of 10 minutes and an hour — and asked Elahi’s counsel Barrister Ali Zafar to consult his client about the undertaking.
Following the assurance of not dissolving from the PML-Q leader, the court reinstated him as the chief minister. The LHC also issued notices to all the parties in the case and summoned them on January 11.
The court also did not make it compulsory for the chief minister to take a vote of confidence on the Punjab governor’s orders.