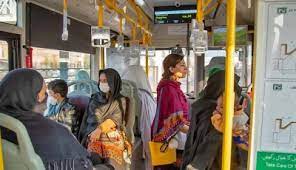 PESHAWAR: In pursuance of the directives of Chief Minister KP, Mahmood Khan for measures against increasing transport fares, Commissioner Peshawar, Raiz Mehsud held a meeting with the Transport Department, Traffic officials and representatives of the Public Transport Association here on Friday.

According to a press release issued here, during the meeting Transport Association agreed on the charging of old fares. Commissioner Peshawar also constituted a committee under the chairmanship of DC Peshawar to finalize new fares within 72 hours time. Riaz Mehsud also issued directives to the district administration, Transport Department and Traffic police to take strict against those found charging exorbitant rates on passengers.

It merits mention here that Chief Minister, Mahmood Khan while taking notice of high transportation charges after ban on the supply of natural gas to CNG Stations, had directed Commissioner Peshawar to take measures for its prevention on an emergency basis.
Over 70 transporters penalized for overcharging commuters: Regional Transport Authority (RTA) Peshawar launched a crackdown against public transport for overcharging commuters here on Friday.

On the special directives of the Chief Minister Mahmood Khan, Secretary RTA, Akbar Iftikhar carried out an operation against transporters and imposed a penalty of Rs.50,000/- on over 70 vehicles.

According to an official handout the ongoing crackdown against overcharging by transporters will continue on all routes and directed the transporters to charge commuters on the basis of the fixed fares. Otherwise, stern legal action would be taken against them.