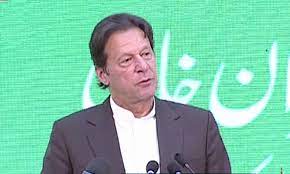 ISLAMABAD: The Election Commission of Pakistan has summoned PTI Chairman Imran Khan, Asad Umar and Fawad Chaudhry during its next hearing on January 3.

Faisal Chaudhry, counsel for Imran and Fawad Ch, told the bench that the PTI chairman was still unable to travel.

The Balochistan member asked where was Imran’s medical certificate.

Faisal Ch replied that he would present Imran’s medical certificate ‘but first let the Supreme Court release its written verdict on the ECP appeal’. He contended that the apex court kept intact the PTI’s objections.

The Khyber Pakhtunkhwa member said ‘if Imran cannot travel, what about other PTI leaders. Why didn’t they appear before the bench?’

Faisal Ch apprised the commission that Fawad Ch was suffering from fever and flu that’s he could not appear before the bench.

Asad Umar’s lawyer Anwar Mansoor requested the bench that it would be appropriate if the contempt case of all the accused was heard together.

Faisal Ch said that the Lahore High Court suspended the show-cause notices issued to Imran and Fawad. He again requested the bench to wait till the Supreme Court guidelines would come.

The Sindh member said that the contempt was not committed of an individual, rather the accused committed contempt of the entire institution.

The KP member asked Asad Umar’s lawyer why his client did not accept the Punjab member’s suggestion regarding tendering an apology to the commission.

The Punjab member said if Umar had tendered an apology in the court, why he was reluctant to apologize to the commission.

On this, Faisal Ch said that he would deliver his message to Umar.

Hearing this, the bench while summoning Imran, Umar and Fawad Ch during its next hearing, adjourned the case till Jan 3.

On December 6, the Supreme Court allowed the Election Commission of Pakistan to continue the contempt proceedings against former prime minister and Pakistan Tehreek-e-Insaf (PTI) Chairman Imran Khan and other party leaders, Fawad Chaudhry and Asad Umar.

During the hearing, the ECP lawyer told the court that the LHC had stopped the election commission from taking action against Imran, Fawad and Asad Umar. The chief justice of Pakistan, however, observed that the ECP had the authority to take action under the Constitution.