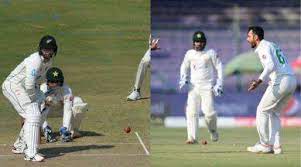 KARACHI (Reuters): Opener Devon Conway led New Zealand s early domination of Pakistan on day one of the second test in Karachi with a knock of 122, before the hosts struck back in the final session to limit their opponents to 309-6 at stumps on Monday.

Electing to bat first, the visitors started strongly as Conway stitched together partnerships of 134 and 100 with Tom Latham and Kane Williamson respectively in front of a modest crowd at the National Stadium.

Conway, who scored a total of 110 runs in the first test, hit 16 boundaries and one six in his 191-ball knock to notch his fourth century in test cricket.

Pakistan were finally able to stem New Zealand s flow in the final session as they took five wickets, with Agha Salman claiming the scalps of Conway, Henry Nicholls and Daryl Mitchell.

Tom Blundell was on 30 unbeaten with Ish Sodhi at the close.

The two-match series is tied at 0-0 after the opening game, which was also played in Karachi, ended in a draw.

New Zealand had made a strong bid to chase down 138 in the last hour of the first test of the two-match series last Friday after Pakistan captain Babar Azam made a daring declaration before poor visibility halted the Black Caps at 61-1 in the eighth over to draw the game.

Pakistan added an extra fast bowler for the second test in hope a little grass left on the wicket would suit their seamers early on, as they left out leftarm spinner Nauman Ali and Mohammad Wasim.

Hasan Ali was recalled, having last played for Pakistan against Sri Lanka in July and missing the 3-0 whitewash at the hands of England last month.

Naseem Shah also returned after fully recovering from the shoulder injury that sidelined him from the last two test matches against England and the first test against the Black Caps.

New Zealand made one change and brought in fast bowler Matt Henry in place of Neil Wagner.

Friday’s draw broke both team’s four-match losing streaks, which included 3-0 losses for each against the aggressive England.

The Pakistan Cricket Board was forced to organize both test matches in Karachi due to weather concerns in Multan, where winter smog and fog have delayed flights and may have disrupted hours of play.

Pakistan is languishing at No. 7 on the ICC world test championship table while New Zealand has endured even more disappointment and is 8th despite beating India in the inaugural WTC final at Lord’s last year.