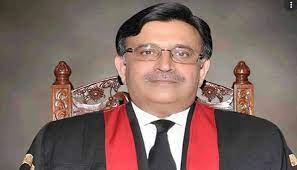 ISLAMABAD (INP): Chief Justice of Pakistan Justice Umar Ata Bandial on Tuesday remarked that the corruption in the country couldn’t be eradicated, despite the court decisions, due to the weaknesses in the system.
The CJP gave these remarks during the hearing of a petition filed by Pakistan Tehreek e Insaf (PTI) chief Imran Khan challenging amendments in the National Accountability Bureau (NAB) Ordinance.
The CJP remarked that no efforts had been ever made to remove the weaknesses in the system.
It was the responsibility of the Parliament to introduce legislation for bringing betterment in the system and ensure implementation of it, he said. The top court CJ remarked that IGs in provinces used to be changed after every five months while SHOs of police stations used to be replaced within three months.
The CJP remarked that the apex court had decided the Pakistan Steel Mills and Reko Diq cases in the past with good intentions. The government couldn’t fix corruption in the projects due to weaknesses in the system, he said. The chief justice remarked that the businesses of many people had been destroyed due to the misuse of NAB law in the country. However, no one should be forgiven for committing corruption. The CJP further said that the court couldn’t find the relevant law which clarifies the point that whether an incomplete assembly could introduce legislation or not. More than a half assembly had boycotted the house as a political strategy, he observed.
He said that it was a good omen that there was free media in the country which was highlighting the truth.
Justice Ijaz ul Ahsan remarked that the NAB amendments had benefited only a few people.
Whether the judiciary should just see this situation as a spectator, he asked, and observed that the NAB law was approved in haste without any debate. Justice Mansoor Ali Shah remarked that there shouldn’t be corruption in the system but who would take steps to curb it.
The judiciary had to interfere when the system was being destroyed, he said, adding that country’s ranking in corruption would have gone down internationally after amendments in NAB law.
The bench questioned under what law it could terminate the NAB amendments on conflicts of interest.