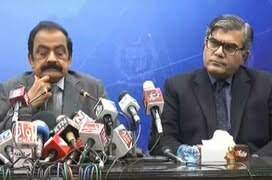 ISLAMABAD (APP): Minister for Interior Rana Sanaullah on Tuesday said Pakistan had “irrefutable evidence” of the involvement of Indian agency RAW in the blast at Johar Town, Lahore last year.
“India was not only behind the Johar Town blast, but also found involved in fanning terrorism in Pakistan,” he said while addressing a news conference here along with Counter Terrorism Department (CTD) Additional Inspector General (IG) Punjab Imran Mehmud.
“This is a matter of internal security and we are initiating the process to take it up at the international level. The Secretary Foreign Affairs will highlight the issue at different world forums while Minister for Foreign Affairs Bilawal Bhutto Zardari will raise the matter of Indian involvement in terror financing and subversive activities in Pakistan at the United Nations,” the minister added.
Rana Sanaullah said Pakistanis had given innumerable sacrifices in wiping out terrorism from the country. “Pakistan has been facing terrorism for several decades, and Pakistanis including citizens, personnel of armed forces, police, Rangers and agencies, journalists, and politicians have either lost their lives in this war or became its victims.” He said gatherings at mosques, Imambargahs, important buildings and else where were targeted. India had remained involved in every form of terrorism in Pakistan.
India was acting just like an enemy and at the same time trying to conceal its brutalities in the occupied Kashmir, he added. The minister said the arrest of spy Kulbhushan Yadev and his statement was sufficient to prove that India was involved in every act of terrorism in Pakistan and was adopting different ways for the purpose.
He said they had “undeniable evidence” that could establish India and its premier spy agency (Research and Analysis Wing) were involved in different terror incidents. He said the Foreign Ministry would raise the issue of Indian involvement in terrorism in Pakistan and also expose it before the world. “After investigation it transpires that India is involved in the Johar Town terror act and its own narrative also tells about its involvement,” he added.
He said India had transferred more than $0.8 million to the terrorists to carry out the task.