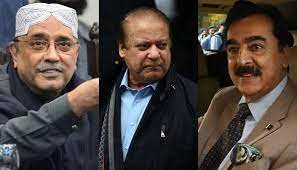 The order was issued by Accountability Judge Muhammad Bashir on Wednesday, saying the Toshakhana reference was being sent back under the amended NAB Ordinance.

As per the Toshakhana reference, the accused were blamed for embezzling Rs110 million. However, under the new NAB Ordinance, a reference can only be framed if the embezzlement is worth Rs500 million.

The accountability court has ordered the NAB to take the reference to a relevant forum.

Judge Muhammad Bashir chaired the proceedings as administrative judge after the completion of term of Judge Asghar Ali.

The court had earlier declared Nawaz Sharif a proclaimed offender due to his continuous absence in the Toshakhana case.

In September 2020, the anti-graft court had indicted Zardari and Yousaf Raza Gilani in the Toshakhana case and also had declared Nawaz Sharif a proclaimed offender in the same matter.

Zardari and Sharif had been accused by the NAB of illegally retaining expensive vehicles gifted to them by different foreign states and dignitaries instead of depositing them in the Toshakhana. The NAB had also maintained that Gilani, during his tenure as the prime minister, facilitated the PPP co-chairman in retaining the vehicles.

According to the anti-corruption body, Asif Zardari and Nawaz Sharif had retained the vehicles against a nominal payment of 15% of their total value through “dishonest and illegal means for their personal benefit and interest”.