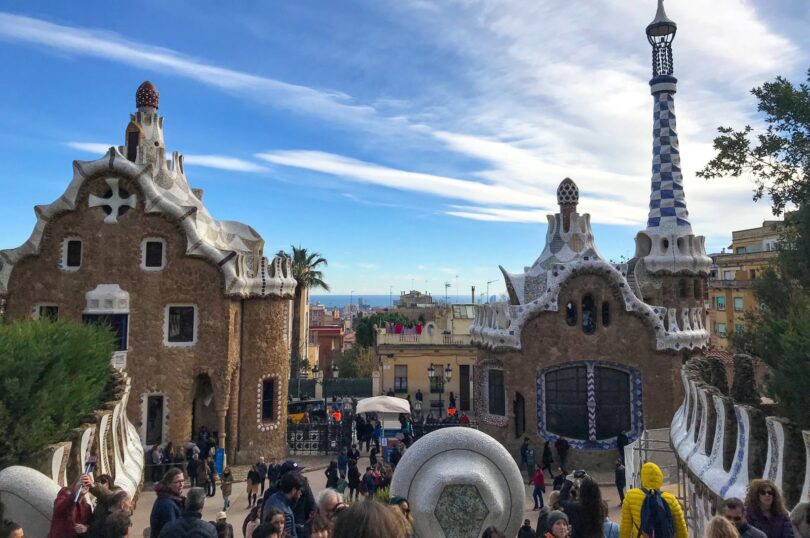 Two different cities, two different architects, how is it that both of them drag people to the land of fairy tales and stage the dance of colors? The similarity in the structures of Antonu Gaudi and Friedrich Hundertwasser will surprise you

Today, I’m going to take you to two places on our list of places to visit in Europe, which we have ticked as “visited” almost straightaway after they were added to the list – Barcelona and Vienna. In fact, this will be an article where you will find answers to more artistic wonderings than questions like “where to visit” or “what to do” in these two cities. Because it is not possible for me to fit what can be done in Barcelona and Vienna in a single article, for they both deserve and require to be handled separately from every aspect.

From the moment we bought our Barcelona tickets, my heart started to go from color to color. As someone who loves to wear colorful clothes and everything colorful, I had no doubt that I would be drowning in colors when we went to this dazzling Mediterranean city. That’s exactly what happened. Besides, what else would one expect from the city where a colorful artist like Antoni Gaudi grew up?

Undoubtedly, Gaudi is the protagonist of Barcelona’s architecture. A protagonist whose imagination has no limits. Notably, Park Guell, Casa Battio, Casa Mila and Sagra da Familia, where he died before it was completed, are just some of his masterpieces that you should see in Barcelona. However, they all have a common feature; Gaudi made all these buildings with his environmentalist identity and used colors and brightness to the fullest.

Park Guell is one of them. When you enter Park Guell, get ready to get lost in the colors and feel like a fairy tale hero.

The story of Park Guell’s emergence begins like this. The royal member of the period, Eusebi Guell, wants to build a city with 60 houses for the residence of wealthy and noble people. He agrees with Gaudi to realize this project in Barcelona, of an infusion of a park and settlement, which he saw in England. The construction of the park began in 1900. In 1914, the works stopped and remained unfinished.

Only two of the planned 60 homes are completed. Apart from this, three viaducts, a square, a colonnaded hall and Gaudi’s house were opened to the public in 1922. Gaudi’s house, Casa Museu Gaudi, called the pink house, serves as a museum today. Gaudi stayed here until he moved to the Sagrada Familia. Another house completed in the park is the Triassic House built on the slopes of the park. Today, it is not open to visitors as it is private property.

There are two structures covered with colored ceramics at the main entrance of the park. Gaudi used the Cross of St. George, which is a symbol of goodness, in one of these two structures, and the figure of poisonous mushrooms, which symbolizes evil, in the other. These two structures, which look like they came out of a fairy tale and fell here, were inspired by Hansel and Gretel. While I was thinking about whether to start tasting this house, whose exterior is covered with cream, from the window or from the door, the truth hit me when I touched the stone walls.

The buildings are so colorful, so natural, so bright, so renewable that you want to take them home. Right across from these two buildings, there is a double staircase that will allow you to reach the terrace. The most important detail here is the dragon figure made with colored ceramics. Gaudi used this figure, known as the guardian dragon of Barcelona, in many of his works.

When you go up the stairs, a hall consisting of 86 columns awaits you, called the Hypostyle Hall. This place was built as a marketplace back in the day. It is said that Gaudi made this hall inspired by the Temple of Apollo. Above the Hypostyle Hall is the viewing terrace with the longest bench in the world. You can see the panoramic view of Barcelona and the Mediterranean in this section called Place de la Natura, or “Nature Square.” You can sit on the 110-meter-long (328-feet-long) bench made of broken ceramics in the shape of a snake surrounding the terrace and watch this colorful world of Gaudi.

Gaudi used arched and curved lines in most of his works, imitating nature, arguing that there are no perfectly straight lines in nature. Gaudi also decorated his structures often using broken and used ceramic pieces called “Trencadis” to cover the surfaces. In fact, although Gaudi wanted to reduce the costs by collecting ceramic wastes in a ceramic factory, the opposite happened. Since the mosaics were assembled by hand, one by one, it cost more than expected.

Apart from the buildings I mentioned in Park Guell, there are many other details. You should set aside a day to wander around this place. Park Guell, where you can feel yourself a fairy tale hero for one day, will drag you into a colorful world with its explosive colors.

At this point, I want to stop talking about Park Guell and take you to Germany’s Abensberg Town and Vienna. Because when I put the words colorful and fairy tale together, I can say that at this point, the similarities between Hundertwasser and Gaudi begin. Friedrich Hundertwasser is an Austrian architect who I think was inspired by Gaudi. Why do you say? It is possible to see these bursts of color in Hundertwasser’s work, both in his home in Vienna and in Abensberg, Germany. He even decorated his works in Abensberg and the Kunst Haus Wien in Vienna with colorful broken ceramics just like Gaudi.

When I saw the works of Hundertwasser in Abensberg, I couldn’t believe that it was not Gaudi’s hand. When the Germans give information about these structures, they say that Hundertwasser is Gaudi’s soul mate. You will also see that the column in the building in Abensberg is not a straight column like the columns in Guell, and that Hundertwasser also imitates nature in his works, believing that there are no straight lines in nature. Like Gaudi, Hundertwasser made works in harmony with nature without disturbing nature. We see an example of this in the Hundertwasser Houses in Vienna.

Believing that the streets should be filled with buildings in harmony with nature, Hundertwasser emphasized in many of his discourses that we should live in accordance with the rules of nature.

He completely reflected these views on his colorful houses in Vienna, and at the same time creating a riot of colors in the streets of Vienna with his colorful images. Hundertwasser House currently has 53 apartments, four shops and 16 private terraces. The terraces have soil and trees on the ground. Even here, don’t be surprised if you see trees with branches coming out of the windows from inside the rooms. You will not be able to see straight lines on windows in these houses. Hundertwasser also finds straight drawings like this boring. He thinks windows should dance with colors, with uneven lines. Even the residents of the houses are allowed to take their brushes in their hands and reach out from their windows and paint around their windows according to their own taste. Today, there are people living in the apartments located in the Hundertwasser House. That’s why it’s not very comfortable to walk around. However, you can take lots of photos from the outside of this interesting and aesthetic structure.

If you ask me what kind of conclusion should I draw from this article, where my aim is not to teach art, I can explain it as follows. The first is that, as I guessed when I saw it, Gaudi and Hundertwasser’s understanding of art is very similar. Both Gaudi and Friedrich Hundertwasser love to dance with colors, their drawings that are not straight and reflect reality, and everything that is natural and bright, and put their environmentalist identities to the fore in their buildings.

Secondly, the part about travel is that I think people should definitely compare the cities they visit or the structures in the cities they visit. This is what I enjoy most during my travels – comparing the similarities and differences between a city I have just visited and cities I have visited before. The fact that I thought the buildings in Abensberg and Vienna belonged to Gaudi after Park Guell, which I saw in Barcelona, and then getting information about these buildings and their architects is proof of how traveling developed my sense of curiosity.

In other words, traveling is not as simple as one might think. Rather than coming and going, it is actually to go, to see, to compare, to contrast, to wonder, and to follow that journey after returning. Many beautiful trips arouse curiosity and delight, and leave your traces behind you.