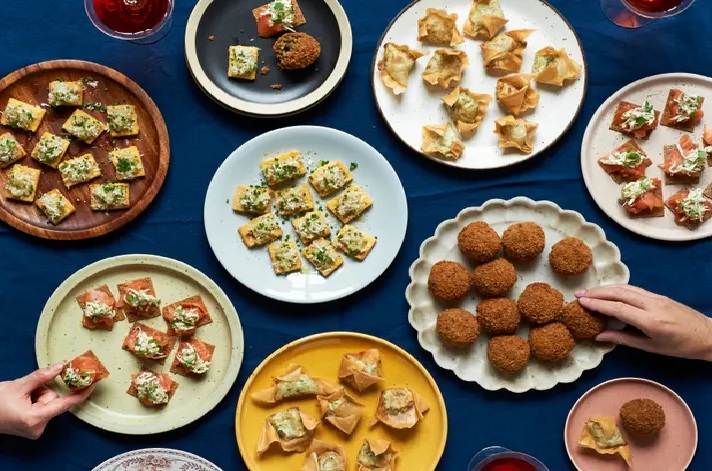 How can I jazz up shop-bought things for easy party food?

“We’re all short of time, and who has the patience to make 50 devilled quail’s eggs?” says Amy Poon, who runs Poon’s London, “but ready-made canapes and dips can be a bit lacklustre.” Luckily, she adds, “they are hugely improved by a homemade sauce or a handful of herbs”. That’s not to say you have to get all fancy: dips, for example, are vastly better with just a squeeze of lemon, a drizzle of flavoured oil (chilli- or garlic-infused, say) and a sprinkling of chopped coriander or parsley.

A seasoned soy sauce is just the ticket to “liven up shop-bought cooked prawns for a marinade”. Poon gets a heatproof bowl and adds 100ml light soy, a half-teaspoon of sugar, half a chopped red chilli, a finely sliced clove of garlic, a tablespoon of chopped coriander, some seasoning and sesame oil. Combine with two tablespoons of heated neutral oil and you’re good to go.

Peanut butter also has a way with canapes: simply mix two tablespoons of smooth peanut butter with a tablespoon each of light soy sauce, rice vinegar and chilli oil, a teaspoon of sugar and, finally, four drops of toasted sesame oil. “I usually use this sauce for noodles,” Poon says, “but it can lift virtually anything, from cooked chicken pieces to summer rolls and crudité platters.”

If you’ve got tinned fish, you’re well on your way to a party platter; little fish with big flavour are ideal for topping things such as crackers, Devon-based chef Mitch Tonks says. “Try a nice little mackerel tartare: a bit of cream cheese, some tinned mackerel, chopped shallots, capers, parsley, maybe some red onion,” says the founder of the Rockfish group of restaurants, which tin their own fish. “A good slab of unsalted butter with finely sliced shallots and a lovely salted anchovy is really wonderful.And mixing tinned tuna with a bit of Olivier salad is always a joy.”

No one wants to contend with cutlery at gatherings, so take a stab at Stevie Parle’s sweet-and-salty devils on horseback. “My grandpa would always make them at Christmas,” says the chef-owner of Pastaio in London. “I’d snaffle as many as possible.” Soak 18 prunes (“big, soft agen prunes”) in a pot of earl grey for an hour (a little longer for “dried” fruit), then remove the stones and “replace with a quarter of a chestnut. Wrap the prunes in pancetta or streaky bacon and fit snugly in a tray.” Pour in 75ml red-wine vinegar, sprinkle with chilli flakes and bake for 10 minutes, until the bacon is crisp. (Leftover prunes can be soaked in brandy and eaten on porridge – “you’ll thank me”.)

If you’re up for a bit more cooking, though, Ollie Templeton suggests turning pitta into arayes (meat-stuffed pockets popular in the Levant). The executive chef and co-founder of Carousel in London says: “Mix minced lamb, harissa and grated tomato, then stuff into pitta. Grill, brushing with butter as they cook, until golden.” Cut into wedges and serve with seasoned yoghurt. Now, they’re sure to entertain you.