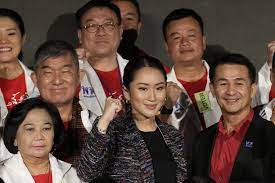 BANGKOK (Reuters): The youngest daughter of billionaire former Prime Minister Thaksin Shinawatra remains Thailand’s top choice to become its next leader, according to an opinion poll, with more than double the score of incumbent and nearest rival Prayuth Chan-ocha.

Paetongtarn Shinawatra, 36, whose father Thaksin and aunt Yingluck both led popularly elected governments toppled in coups, was the top choice for 34% of respondents in a survey by the National Institute of Development Administration (NIDA).

Paetongtarn’s support rose sharply from 21.6% from a September poll, when the majority surveyed were undecided. NIDA polled 2,000 voting-age people between Dec. 17 and Dec. 22.

Thailand must hold an election by May next year, according to its election commission, but no date has yet been set. Best known by her nickname, “Ung Ing”, Paetongtarn is an executive in the Pheu Thai party, which has yet to name her as its prime minister candidate.

The Shinawatra name has proven to be a huge election draw in Thailand since 2001, synonymous with populist policies that won Thaksin, Yingluck and their allies tens of millions of votes from the rural poor and urban working classes in ballots between 2001 and 2011.

Respondents in NIDA’s poll who backed Paetongtarn said it was due to her “party’s policies and previous achievements of the Shinawatra family.” Prayuth’s ratings also improved to 14.05% from 10.1%, according to NIDA. He has been in power since 2014, when as army chief he led a coup against a government run by Yingluck.