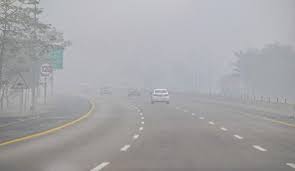 ISLAMABAD: National Highways and Motorways Police (NHMP) have expanded its campaign’s reach to sensitize motorists travelling on motorways in the dense fog situation and shared video messages in various regional languages to ensure safety of the public property and lives. Talking to APP on Monday, an official of NHMP, Inspector Saqib Mumtaz expressed displeasure over some motorists’ non-cooperative behaviour, who he said were were ignoring the fog warnings and putting their lives at risk.

“Some motorists rejected to cooperate with the police despite stern warnings and bad visibility and forcefully moved safety cones and left for their respective destinations and this is irresponsible.”

He said traffic flow was suspended on different sections of the motorways due to fog to which some motorists argued and “contested with the officials to keep on travelling without realizing the situation, ultimately putting their own and others’ lives at risk.”

The official apprising situation of different sections of motorways including Islamabad to Peshawar, Islamabad to Rashakai, Balkasar to Lahore, Sawat Express Highway from Karnal Sher Khan to Ismaila and from Layyah to Lahore said, were closed due to dropped visibility.
He asked travellers to avoid unnecessary mobility and if it was necessary to travel they must keep their vehicles’ fog lights on along with double indicators for the entire duration of their journey on highways and motorways where fog has disrupted visibility level. The official said it was imperative to follow police advisory because it was solely meant for public safety and the motorists must keep low speed in fog, heavy mist, snow, and other poor-visibility situations.

He also advised commuters for continuous use of vehicles’ viper blades and keep a fair distance to avoid a collision.

It is pertinent to mention here that every year dense fog related accidents in winter claim a lot of lives, especially due to multi-vehicle chain crashes that is why police closes down some motorways junctions to protect human lives.

The official said police was well aware of the necessity of the commuters’ travelling but “it could not be allowed at the cost of their lives and they are asked to cooperate in their own interest.” (APP)