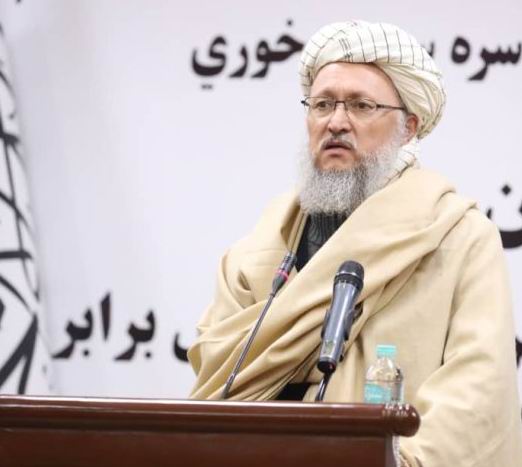 KABUL (Agencies): The Islamic Emirate of Afghanistan Deputy Prime Minister, Mawlavi Abdul Salam Hanafi, in the occasion of ‘International Migration Day’ called on the countries of the region not interfere conducting major development projects in Afghanistan.
The Deputy PM Mawlavi Abdul Salam Hanfi attended the ceremony of ‘International Migration Day’ celebrated in Kabul by the Ministry of Refugees and Repatriation.
During the celebration ceremony, Khalil ur Rahman Haqqani, Acting Minister of Refugees and Repatriation, said about 7 million Afghans have migrated to neighboring and other countries.
According to him, two Afghans displaced inside the country for the cause of wars.
He said that the Islamic Emirate deemed its main responsibilities providing livelihood and housing to displaced residents.
Haqqani reminded that in one year, about three million immigrants have returned to the country from Iran, Pakistan, and other countries.
Meanwhile, the Islamic Emirate of Afghanistan, Prime Minister, Mullah Mohammad Hassan Akhund, in his message, called the reason for Afghan migration, the aggression of the Red soveit Army and Americans invasion with allies.
PM on his message, called on the countries of Iran and Pakistan to treat Afghans refugees wills based on the rights of immigrants international rights.
In the same time, PM in his message, called on Afghans refugees to return to their country.
Meanwhile, the deputy of the International Migration Organization in Afghanistan said that since 1992, this organization has been working in Afghanistan in different sectors.
The International Migration organizationhas helped 700 thousand returnees so far in a year he said.
Afterwad, Mohajer Farahi, Deputy Minister of Publication Affairs of the Ministry of Information and Culture, said that the compulsions and pressures have caused the migration of Afghans, adding, that now advertisements and propaganda have caused to prevent Afghans from returning to their country.
International Migration Day is celebrated every year by countries, on the occsiosn, the problems and challenges of immigrants and finding solutions to the refugees usually take to discussions.