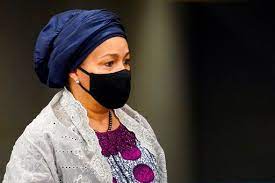 UNITED NATIONS (Reuters): Deputy UN chief Amina Mohammed urged countries to urgently consider Haiti’s request for an international specialized armed force to help restore security in the Caribbean state and alleviate a humanitarian crisis. “Now is certainly not the time for the world to turn away from Haiti,” she told the UN Security Council. “It is time to step up and turn the current crisis into an opportunity for Haiti to bounce back stronger.”

Haitian gangs have expanded their territory since the 2021 assassination of President Jovenel Moise. The resulting violence has left much of the country off-limits to government and led to routine gun battles with police. In September, Haitian gangs created a humanitarian crisis by blocking a fuel terminal for nearly six weeks, halting most economic activity.

UN Secretary-General Antonio Guterres in October proposed that one or several countries send “a rapid action force” to help Haiti’s police remove a threat posed by armed gangs. He was not suggesting that the force be deployed by the United Nations. So far though, no country has offered to lead such a force, though the Bahamas has said it could send troops or police if asked to do so. Diplomats have also said some African countries were ready to offer support as well.

US Deputy UN Ambassador Robert Wood told the Security Council that Washington continues “to advocate for international security support, including a non-UN multinational force, as requested by the Haitian government.” “The United States has provided more than $90 million in security support to Haiti in the past 18 months and will continue to provide critical support bilaterally,” Wood said.

Russia requested the Security Council meeting on Haiti. Russia’s UN Ambassador Vassily Nebenzia said: “We have doubts that the option of sending international military force can fundamentally change the situation.” The US ambassador to the United Nations, Linda Thomas-Greenfield, said in October that the United States was drafting a Security Council resolution to back a non-UN mission to boost security and allow humanitarian aid to flow. But diplomats said the measure would not be voted on until a force was formed. A council resolution needs nine votes in favor and no vetoes by the United States, Britain, France, China or Russia.