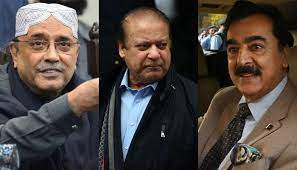 The TLTP learnt that the detailed verdict stated that the lawyers said after the amendments in the NAB Ordinance, a case cannot be registered on an amount less than Rs 500 million. Whereas according to the petitioner the Toshakhana reference is worth Rs 120 million.
After the amendments in the NAB Ordinance, section 5 was included which states that cases over Rs 500 million come under the jurisdiction of the NAB. So, the court ordered to return of the Toshakhana reference against PPP co-chairman Asif Zardari, PML-N supremo Nawaz Sharif and former prime minister Yousuf Raza Gilani to the NAB and ordered to send the NAB reference to the concerned forum.

A reference was also filed against Anwar Majeed and Abdul Ghani Majeed for paying the taxes on the luxury vehicles imported via Toshakhana.

The reference said that the former president kept the luxury vehicles given as gifts from the UAE and Libya instead of handing them over to Toshakhana and paid their tax amounts using fake bank accounts.

It said that former premier Yousuf Raza Gilani gave undue favour to the president and Nawaz Sharif during his tenure also allowed him to handover the vehicles to Asif Zardari. (TLTP)