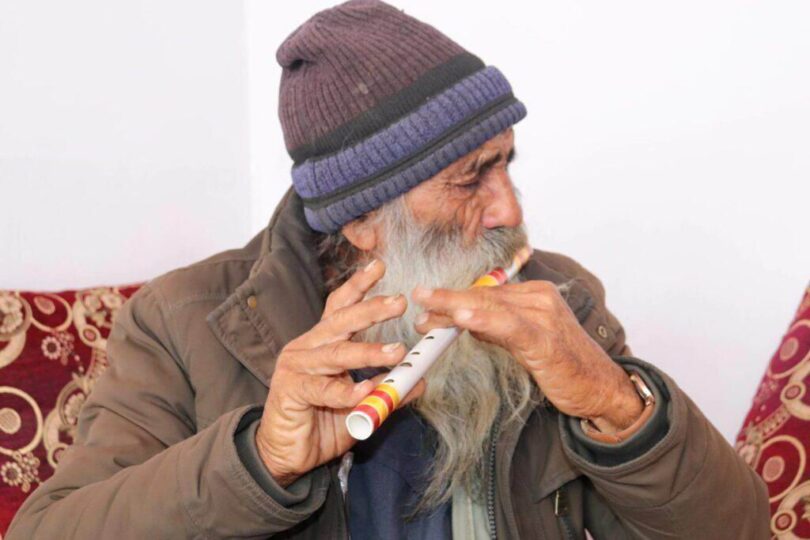 GHAZNI (Pajhwok): Janan Mama, the resident of Khawaja Umari district in southern Ghazni province, lost his three sons during past war and now played flute to deflect the sorrow and pain he carried.
Janan Mama, 70, is currently living in the Qala-i-Naw locality of Khawaja Umari district 15 kilometres north of Ghazni City, the provincial capital.
He played the flute with the art of his voice and fingers, tears flow from his eyes. He told Pajhwok Afghan News that that over the past 15 years he had been playing the flute. He dropped rears due to the pain he suffered after the loss of his sons but other people enjoyed his flute playing art.
Janan Mama said he offered happiness and joy to other besides his the sorrow he had been suffering from.
He could not stop his tears that flow on his face when he started his painful story saying: “My life is full of pain and grief, I have never tasted pleasure in my life. I have witnessed a lot of pain and problems in my 70 years of life that nobody else could have witnessed.”
I have inherited orphan life from in my childhood, I had eight uncles but they were cruel and tyrant. When he grew up then his brother did not behave with him properly.
He said life was going in this way when five years ago his two sons who served in police were killed on the same day.
He said his deceased sons were married, one left a widow and four children and another left a widow and five children.
He added his third son who was not married was killed during a clash, he was not married.
“My children had dreams, but they could not reach to their dreams. They said they served the country but both were killed on the Eid-ul-Adha day and another was killed in a clash,” said the bareheaded elderly Janan Mama.
He added one of his sons went abroad on illegal rout but his another son is sick all the time.
Janan Mama said in the past he drove a truck but currently he has nothing to do and lived a painful life with this orphan grandsons.
He said he did not felt devastated by the loss of his sons but the current situation of the country was painful for him as well.
“My heart is broken due to the four decades of conflict, the loss of youth, injured people and unfortunate incidents happening in the country,” he added.
He said he played the flute to distract the sorrow and pain that surrounded him, adding that every evening he clime to the hill side near his house and played the flute till late night.
He said sometimes the youth also forced him to play the flute and they gather at this home to listen to the flute.
Janan Mama said his biggest dream was peace and stability in the country where the bloodshed is stopped and no mother lose her son or daughter.
Mohammad Amin Khelj, Janan Mama’s villager, said that Janan Mama was devastated by the loss of his sons and tears flow from his eyes when he play the flute.
He added Janan Mama was expert in playing flute and he could play many songs.
Janan Mama is not the only person who is devastated by the loss of his sons but there are hundreds of other people in the country who had been devastated by the past war and conflicts.