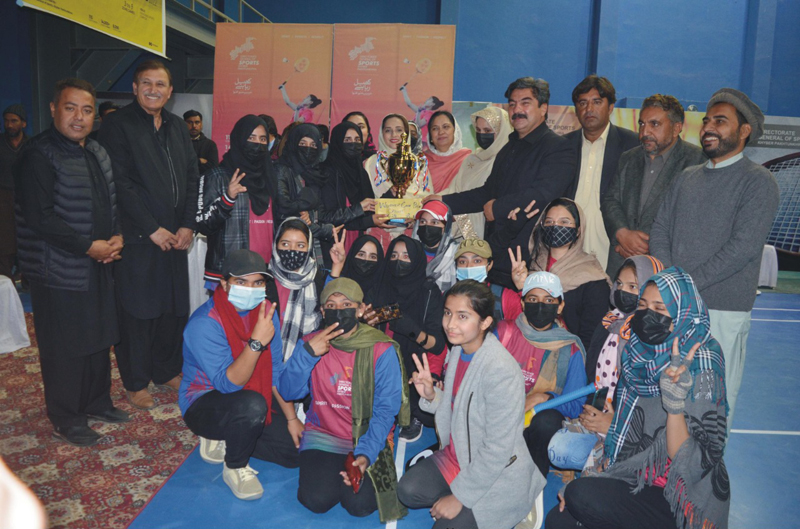 PESHAWAR: Dera Ismail Khan clinched the trophy after defeating Dir Lower in the final of the Cricket event part of the Khyber Pakhtunkhwa Inter-Constituency Women Games which concluded here at Hayatabad Sports Complex on Thursday.

Dera Ismail Khan won the cricket final by 5 wickets before Dir Lower won the toss and made 96 runs in the 10 overs spell wherein Khawla Khan and Sumra were the top runs contributors. Khawla made an elegant knock of 33 runs with three sixes and five boundaries while Sumra made 29 runs including five boundaries and one six.

Member Provincial Assembly Humayun Khan, Rabia Basri, Madiha Nisar and Sumira Shams graced the occasion as guests and distributed trophies and cash prizes among the winners and runners-up. Their guests and a good number of spectators were also there and witnessed the thrilling final.

DSO Charsada Tahsinullah Khan, DSO Dir Lower Abrar Khan, Deputy Director Syed Jafar Shah, Bushra,Caretaker Yasir Islam and other personalities were present. The final cricket match was played between the teams of Dera Ismail Khan and Dir Lower in which Dir Lower Batting first, the team scored 96 runs in the allotted overs for the loss of six wickets, which included Bushra’s innings of 27 runs and Jalwa’s innings of 25 runs. Both Khawla and Sumra also played a good role in the opening. DI Khan achieved the target in the last over and claimed the title of champion with Aisha scoring 25 runs while Khadija scored 19 runs. In the final match of Badminton, the Peshawar team won the trophy by defeating the Hazara Region team by 3-2.

Finally, prizes were distributed among the winning players. Director Sports Female Games Rashida Ghaznavi in her address paid tribute to the members of the assembly and other personalities that they played their role in the success of these games and that such events will continue in the future and the athletes Opportunities and facilities will continue to be provided.

In the final round competition continues with enthusiastic excitement at the different grounds of Peshawar, in which the players are using their full potential for the success of their teams. Bannu defeated Peshawar while Nowshera defeated Charsadda after a brilliant match to reach the semi-final of the Men Volleyball.

In the first quarter-final of the event, Bannu won the match against Peshawar by 25-20, 25-21 and 25-23 By winning Bannu, Peshawar was eliminated from the event. Surprisingly, by keeping good teams in the same group, the tournament has been made possible and a good team like Peshawar has been eliminated from the final stage. Before that, in the group matches, Nowshera defeated Karak by two goals and South Waziristan defeated Bitagram by two goals to nil in the football event.

In the first match that started at Shama Cricket Ground, Peshawar defeated Swabi by 10 wickets. Swabi scored 120 runs in the allotted overs. Mehran scored the highest score 45 with four sixes. Mohsin scored 18 runs and Zia scored 13 runs. The target was achieved without any loss. On behalf of Peshawar, Sartaj played a brilliant innings with the help of six sixes and played an impressive innings of 51 runs and remained not out. Ahmed remained not out with 20 runs. Peshawar’s opener was injured for 18 runs and the innings could not continue. Before that, Kohat qualified for the next stage by defeating Abbottabad by six wickets. In the Tehmas Khan Football Gowand football matches, Chitral was declared victorious after losing the match. Earlier, the committee headed by Azizullah Khan objected to the players of Peshawar, which was later accepted as correct and declared the match in favor of Chitral.