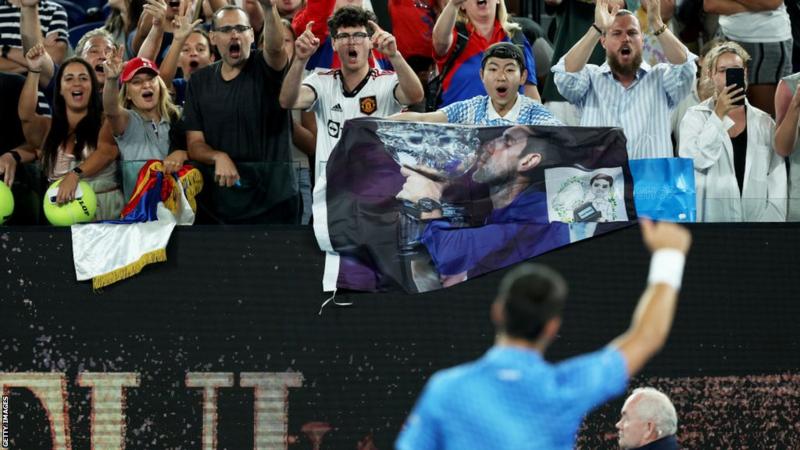 Melbourne (AFP): Serbian flags waved and Rod Laver Arena rose to give Novak Djokovic a rapturous welcome back to the Australian Open on Tuesday, a year after he was kicked out of the country.

The nine-time Australian Open champion was deported on the eve of last year’s Grand Slam event because of his stance on Covid vaccines.

But spectators, among them members of Melbourne’s Serbian community, gave him a rousing reception as he entered the court he has made his own down the years to face Spain’s 75th-ranked Roberto Carballes Baena.

It has been 1,821 days since the Serbian great last lost a match at Melbourne Park and he seemed in the mood to continue that run as he slapped down an ace with the opening serve of his match, to a huge roar.

Fans had earlier been unsure of the welcome Djokovic might receive after his three-year ban from Australia was lifted in November, enabling him to go for a record-extending 10th victory at Melbourne Park. The Serb’s attempts to compete with a medical exemption in 2022 angered many Australians in a city that endured some of the longest lockdowns in the world at the height of the pandemic. But on a scorching-hot day 12 months later, most believed it was time to move on from last year’s saga.

“I don’t know how he goes from being a national threat a year ago to being allowed to play, but that’s a discussion for another time,” said Goran, who was draped in the Serbian flag, referencing one of the reasons that Australia deported Djokovic.

“He’s gonna win it. He’s going to win his 10th and he’s going to secure himself as the best of all time. It’s never going to be close. He’s not going to drop a set.” Australian Open organisers have said any fans targeting Djokovic would be slapped with potential tournament bans.
There was no hint of public dissent on his return, but some remain quietly unconvinced.

“I’m not a fan of Djokovic but you can’t deny his genius,” said Australian spectator Rob, who like other fans only wanted to give their first name.

“Emotionally, he rubs me up the wrong way. But I think in terms of what happened last year, it is literally in the past,” added his friend Tom. “I don’t think there isn’t any reason that he shouldn’t be playing.”

Rob described why he thought Djokovic had never historically won over the Australian public in the same way as his great rivals Rafael Nadal and Roger Federer. “I think it’s about demeanour,” he said. “It’s just a personal preference, in my view, for the way that Roger, Rafa and Ash (Barty) would conduct themselves.

“I’m reading ‘The Remains of the Day’ at the moment and the butler talks about dignity all the time. And I think that’s a quality that those players have.” Many of the Serbian fans at Melbourne Park did not have tickets for the centre court night session when their hero was in action, but instead cheered him on from big screens in the gardens. “I was at the charity match with (Nick) Kyrgios the other night,” added Goran. “And he got a warm reception. The crowd seem to love him. “So it’s good to have him back.”