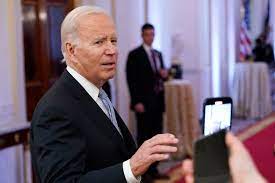 In the United States, a scandal is growing around the illegal storage of classified documents by President Joe Biden. His house was searched. About how the American society reacts to this and what threatens the head of state – in the material of RIA Novosti.
Already the third episode
Last weekend, the Department of Justice and the FBI conducted a 13-hour search of the Biden mansion in Wilmington, Delaware. This was agreed with the president’s lawyers. He himself went to another residence for the weekend.
At least six state documents with different categories of secrecy were seized. Including received by Biden when he was a senator (1973-2009) and vice president (2009-2017), lawyer Bob Bauer said.
He did not specify what was the immediate reason for the search. According to him, Biden’s representatives themselves insisted on “the most expeditious progress in the process.”
This is the third time that secret papers have been found in the president’s possession. For the first time – in November 2022, at the think tank in Washington. The White House admitted: Biden used these premises for work. In Wilmington, there were also searches before, but not in a residential building, but in a garage and outbuildings. And they found some confidential material there.
Republican pressure
Biden’s legal team reached an agreement to inspect the Delaware mansion with John Lausch, the U.S. attorney who led the original investigation last year. His successor, Robert Hur, who was permanent special counsel on the case, will soon take over and continue his work.
Both of them are close associates of former President Donald Trump, who helped them in their careers. In the summer, documents were also confiscated at his Florida estate, which, according to investigators, he had no right to take out of the White House.
Trump called the story a Democrat-led witch hunt. Biden found himself in exactly the same situation. Of course, the Republicans will take advantage of this. They have already demanded full details of the documents and their potential impact on national security.
Rep. James Comer, in a letter to the White House chief of staff, said Biden must report to Congress. “It is alarming that classified documents were improperly stored in his house for at least six years (after leaving the post of vice president. – Approx. ed.). This raises questions about who could get acquainted with them,” the congressman said..
In a microblog, he added: “The White House said that all classified materials have been returned. The Department of Justice has discovered more. Americans need answers right now.” Comer is chairman of the House Oversight Committee, where the Republican Party has a majority. He may initiate additional proceedings. But not only “elephants” put pressure on Biden. Some Democrats also oppose it.
“Donkeys” are tired
The Senate (the upper house of Congress) is still under the control of the donkeys. However, Democratic Senators Joe Manchin and Tim Kaine called for an investigation into Biden’s “improper handling” of documents of national importance. As they told FoxNews, a thorough review is needed. “The appointment of a special prosecutor for this case is the right move,” Kane said.
In the fall, shortly before the midterm congressional elections, many Democrats did not want to see the head of state at campaign rallies. His steadily falling ratings cast a shadow over the entire party. After the defeat of the Republicans in the Senate, Biden seemed to have regained the confidence of his fellow party members. However, opinion polls show that more than half of Americans do not approve of his work in the White House. It becomes toxic to “donkeys”.
It was also influenced by the fact that Biden was accused of the same thing as Trump six months ago. The president’s supporters justify themselves: since he is now the head of state, it means that the situation with the documents is not so dangerous.
Society reacts
According to an ABC News / Ipsos poll, 64% of respondents disapprove of Biden’s actions with state materials, 77% of Trump – 77%. The White House stubbornly insists that the two scandals cannot be compared.
Trump, without actually denying the illegality of the export of documents, skillfully presented himself as a victim of the current government. Biden, declaring his readiness for an open investigation, insisted that they would not find anything on him. And now he reacted extremely indistinctly: “I was informed. I am very surprised that there were any government records.”
A recent Yahoo News/YouGov study found that about two-thirds of Americans are in favor of a full-scale investigative action against Biden. Only 16 percent (27 among Democrats) are strongly opposed.
Welcome to the club
A peculiar trend has developed in the recent history of the United States. Since the Watergate scandal, which ended in the resignation of President Richard Nixon in 1974, only one American leader has gone without a special investigation associated with him or his associates: Barack Obama.
Everyone else dealt with prosecutors in one way or another. Gerald Ford was suspected of money laundering, Jimmy Carter got into trouble because of the inappropriate behavior of assistants. Ronald Reagan and his associates sold missiles to Iran and used the proceeds to illegally finance rebels in Nicaragua. The echo of this scandal haunted George W. Bush. The Bill Clinton administration has been accused of kickback deals, Bush Jr. has been held accountable for the invasion of Iraq, and Trump for ties to Russia.
Of course, Biden is not in danger of impeachment. But running for a second term will become more problematic. The Democrats, meanwhile, have no real alternative. And this strengthens the Republicans, many of whom, as before, are betting on the “victim of the regime” – Trump.