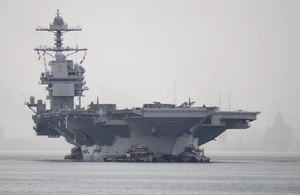 The carrier and other vessels in its strike group were conducting operations and training exercises alongside NATO allies and partners throughout the Atlantic Ocean.

At approximately 100,000 tonnes, 330 metres long and with over 5000 crew, USS Gerald R. Ford is too large to enter His Majesty’s Naval Base (HMNB) Portsmouth and had to be anchored off Stokes Bay in the Solent.

In common with all other US aircraft carriers, it is powered by nuclear reactors. The presence of these nuclear reactors in the Solent requires an enhanced level of support from UK shore staff.

Dstl’s Radiation Sciences Group’s Radiation and Nuclear Emergency Response Organisation provides a vital component of the support for visiting nuclear powered warships. This involves the provision of a highly trained Nuclear Emergency Monitoring Team, able to provide immediate response monitoring staff and assets, and secondly by providing health physics advisers who would, in the event of an emergency, deploy to the main response command cell locations within one hour, to provide expert radiation protection advice.

The expertise, professionalism and commitment provided by the Dstl Radiation Sciences Group to support and enable operational visits by nuclear-powered warships in meeting UK statutory requirements was, and continues to be, instrumental in allowing this to happen for the authorised berths in HMNB Portsmouth and the authorised berth in Southampton.

This commitment requires continued training and demonstration of the radiation science capabilities that would be relied upon in the unlikely event of a radiation emergency occurring during such visits. Such visits as the one recently supported are of course extremely important in maintaining the joint US and UK accords at all levels. What is absolutely certain is that the visit was extremely well received and indeed vital for the hearts and minds of the 5000+ crew who enjoyed their brief stand down in the UK.