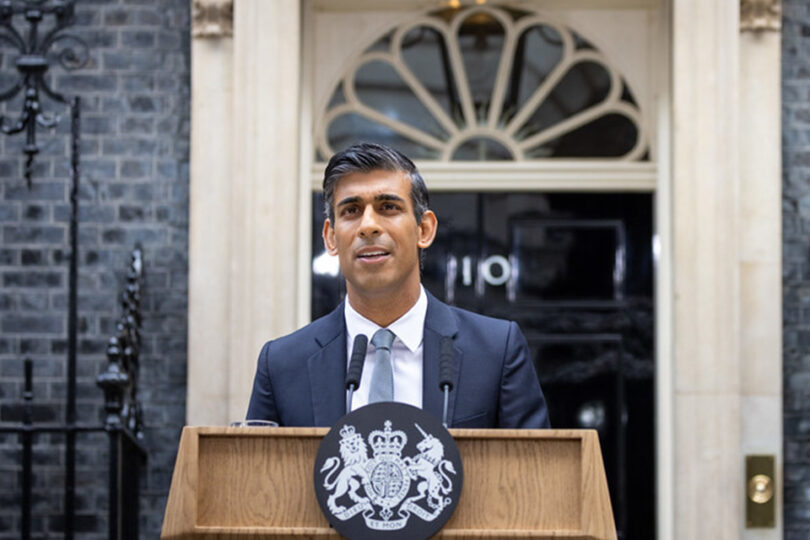 LONDON: Prime Minister Rishi Sunak made a statement to the House of Commons on illegal migration.

Mr Speaker, before I start, I know the whole House will join me in expressing our sympathies to the families of those who lost their children so tragically in Solihull.

With permission, I’d like to make a statement on illegal migration.

I hope the whole house would agree… there is a complex moral dimension to illegal migration.

The balancing of our duty to support people in dire need… with the responsibility to have genuine control of our borders… understandably provokes strong feelings. And so… it is my view… that the basis for any solution shouldn’t just be ‘what works’… but what is right.

Mr Speaker… It is unfair that people come here illegally.

It is unfair on those with a genuine case for asylum…

…when our capacity to help is taken up by people coming through, and from, countries that are perfectly safe.

It is unfair on those who come here legally…

…when others come here by cheating the system.

And above all, it is unfair on the British people who play by the rules…

…when others come here illegally and benefit from breaking those rules.

As currently constructed the global asylum framework has become obsolete.

Hostile states are using migration as a weapon on the very borders of Europe.

And as the world becomes more unstable – and the effects of climate change make more places uninhabitable – the numbers displaced will only grow.

We have a proud history of providing sanctuary to those most in need.

Thousands of families will be setting extra places around the Christmas table this year.

No-one, no-one can doubt our generosity of spirit.

But today far too many of the beneficiaries of that generosity are not those directly fleeing war zones or at risk of persecution but people crossing the channel in small boats.

Many originate from fundamentally safe countries.

All travel through safe countries.

Their journeys are not ad hoc… but coordinated by ruthless, organised criminals.

And every single journey risks the lives of women, children – and we should be honest, mostly men, at sea.

Mr Speaker… This is not what previous generations intended when they drafted our humanitarian laws.

Nor is it the purpose of the numerous international treaties to which the UK is a signatory.

And unless we act now and decisively, this will only get worse.

Already in just seven weeks since I became Prime Minister, we have delivered the largest ever small boats deal with France…

…with significantly more boots on the ground patrolling their beaches.

For the first-time, UK and French officers are embedded in respective operations in Dover and Northern France.

We’ve re-established the Calais Group of Northern European nations – to disrupt traffickers all along the migration route.

And last week this group set a long-term ambition for a UK-EU wide agreement on migration.

Of course, this is not a panacea, and we need to go much further.

Over the last month the Home Secretary and I have studied every aspect of this issue in detail, and we can now set out five new steps today.

First, our policing of the channel has been too fragmented, with different people, doing different things, being pulled in different directions.

So we will establish a new, permanent, unified Small Boats Operational Command.

This will bring together our military, our civilian capabilities, and the National Crime Agency.

It will coordinate our intelligence, interception, processing, and enforcement.

And use all available technology, including drones for reconnaissance and surveillance, to pick people up and identify and then prosecute more gang-led boat pilots.

We’re adding more than 700 new staff and also doubling the funding given to the NCA for tackling organised immigration crime in Europe.

Second, these extra resources will free up immigration officers to go back to enforcement which, will in turn, allow us to increase raids on illegal working by 50%.

And it’s frankly absurd that today illegal migrants can get bank accounts which help them live and work here. So we will re-start data sharing to stop this.

Third, it’s unfair and appalling that we are spending £5.5 million every day on using hotels to house asylum seekers.

We must end this.

So, we will shortly bring forward a range of alternative sites such as disused holiday parks, former student halls, and surplus military sites.

We have already identified locations that could accommodate 10,000 people and are in active discussions to secure these and many more.

Our aim is to add thousands of places through this type of accommodation in the coming months – at half the cost of hotels.

At the same time, as we consulted on over the summer…

…the cheapest and fairest way to solve this problem is for all local authorities to take their fair share of asylum seekers in the private rental sector.

And we will work to achieve this as quickly as possible.

Fourth, Mr Speaker we need to process claims in days or weeks, not months or years.

So we will double the number of asylum caseworkers.

And we are radically re-engineering the end-to-end process…

We will also remove the gold plating in our modern slavery system, including by reducing the cooling off period from 45 to 30 days – the legal minimum set out in the ECAT Treaty.

As a result of all these changes, we will triple the productivity of our caseworkers…

…and we expect to abolish the backlog of initial asylum decisions by the end of next year.

A third of all those arriving in small boats this year – almost 13,000 – are Albanian.

And yet Albania is a safe, prosperous European country.

It is deemed safe for returns by Germany, France, Italy, Sweden.

It is an EU accession country, a NATO ally and a member of the same treaty against trafficking as the United Kingdom.

The Prime Minister of Albania has himself said there is no reason why we cannot return Albanian asylum seekers immediately.

Yet our rejection rate is just 45%.

That must not continue. So today I can announce a new agreement with Albania – and a new approach.

First, we will embed Border Force officers in Tirana airport for the first time ever…

Second, we will issue new guidance for our case workers and make it crystal clear that Albania is a safe country.

Third, one of the reasons we struggle to remove people is because they unfairly exploit our modern slavery system.

So we will significantly raise the threshold someone has to meet to be considered a modern slave.

For the first time, we will actually require a case worker to have objective evidence of modern slavery rather than just a suspicion.

Fourth, we have sought and received formal assurances from Albania confirming they will protect genuine victims and people at risk of re-trafficking…

…allowing us to detain and return people to Albania with confidence and in line with ECAT.

As a result of these changes, the vast majority of claims from Albanians can simply be declared “clearly unfounded”.

And those individuals can be swiftly returned.

Lastly, we will change how we process Albanian illegal migrants, with a new dedicated unit expediting cases within weeks, staffed by 400 new specialists.

Over the coming months, thousands of Albanians will be returned home.

And we’ll keep going with weekly flights until all the Albanians in our backlog have been removed.

And in addition to all these new steps, Mr Speaker let the House be in no doubt that when legal proceedings conclude on our Migration and Economic Development Partnership…

…we will restart the first flights to Rwanda….

…so those here illegally who cannot be returned to their home country, can build a new life there.

But Mr Speaker, even with the huge progress we will make with the changes I have announced today… there still remains a fundamental question…

How do we solve this problem… once and for all?

It is not just our asylum system that needs fundamental reform.

Our laws need reform too.

We must be able to control our borders to ensure that the only people who come here come through safe and legal routes.

However well intended, our legal frameworks are being manipulated by people who exploit our courts to frustrate their removal for months or years on end.

Mr Speaker, I said enough is enough… and I mean it.

And that means I am prepared to do what must be done.

So early next year we will introduce new legislation to make unambiguously clear that if you enter the UK illegally you should not be able to remain here.

Instead, you will be detained and swiftly returned either to your home country or to a safe country where your claim for asylum will be considered.

And you will no longer be able to frustrate removal attempts with late or spurious claims or appeals.

And once removed you should have no right to re-entry, settlement, or citizenship.

And furthermore, if our reforms on Albania are challenged in the courts…

…we will also put them on a statutory footing to ensure the UK’s treatment of Albanian arrivals is no different from that of Germany or France.

The only way to come to the UK for asylum will be through safe and legal routes.

And as we get a grip of illegal migration, we will create more of those routes.

We will work with the UNHCR to identify those most in need so the UK remains a safe haven for the most vulnerable.

…in consultation with Local Authorities to determine our capacity…

…and amendable in the face of humanitarian emergencies.

Mr Speaker, that is the fair way to address this global challenge.

But it is the right thing to do.

Because we cannot persist with a system that was designed for a different era.

We have to stop the boats.

And this government will do what must be done.

Mr Speaker we – will be tough but fair.

And I commend this Statement to the House.