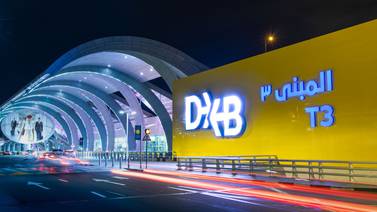 The Middle East hub, which handled more than 60 million passengers last year, accounts for half of the world’s busiest international air routes according to aviation consultancy OAG.

Topping the billing for the UAE airport is its Dubai to Riyadh route, with 3.19 million scheduled seats and 40 flights per day. It is the second busiest international route in the world, behind Cairo to Jeddah that had 3.23 million seats scheduled in the past 12 months.

London Heathrow to Dubai, a route that has just had Emirates Airline’s first retrofitted A380 superjumbo deployed on it, is the fourth busiest route in the world. It ranks behind the London airport’s services to New York JFK, which lists in third place in terms of scheduled seats.

Dubai to Jeddah also features in the top 10, with 2.42 million seats per year. Destinations in the Middle East climbed up the rankings in 2022, taking the lead from other routes across Asia, according to OAG.

India also experienced an increase in route capacity with two routes ranking in the top 10, both of which operate between Dubai. These include Mumbai to Dubai, a route with 1.97 million seats, and Delhi to Dubai which squeezes into 10th position with 1.89 million scheduled seats.

Other routes making it into the ranking include Kuala Lumpur to Singapore, which ranks fifth after being the world’s busiest route back in 2019; Orlando to San Juan as the seventh busiest route; and Cairo to Riyadh listed in ninth.

OAG defines the world’s busiest flight routes as those with “the largest volume of scheduled airline seats” with data recorded for flights in both directions on each route. The data took into account scheduled seats between October 2021 and September 2022.