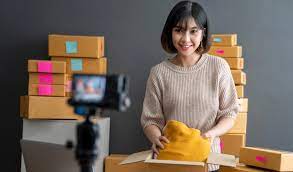 LONDON (Reuters): One of China’s biggest exports in 2023 will be its social e-commerce phenomenon. TikTok, YouTube and Amazon.com (AMZN.O) are among the companies rolling out features that blend online sharing and shopping. The latest craze also is destined to run into some limitations.

There’s early evidence that selling goods over live social networking works beyond the People’s Republic. Viewers enjoy interacting with celebrities and so-called influencers, but the ultimate goal is clicks to buy. Social sensation Nisrin, for one, has attracted 500,000 TikTok followers, while selling as much as 10,000 pounds ($12,313) of makeup and other products in a single video session.

ByteDance-owned TikTok introduced the concept in the United States and Britain to replicate the success of Douyin. Its Chinese sister app enabled goods valued at $119 billion to be sold in 2021. Amazon recently unveiled its own copycat, Inspire. OnlyFans, a video service known for its sexual content, also allows creators to sell personalised merchandise to subscribers.

Live online shopping revenue will help offset shrinking marketing budgets. U.S. social media advertising spending, which had been growing at around 30% a year, is set to slow to about 12% on average over the next three years, to reach $114 billion in 2025, according to data portal Statista. By contrast, consultancy McKinsey projects U.S. social media e-commerce sales will increase 20% annually over the same span, to $80 billion.

The appeal makes sense. Retailers want to attract and keep shoppers online. With customers able to learn more about products from interactive live streams, it should reduce returns, a costly aspect of the e-commerce trade.

Many products won’t suit the medium, however. Cosmetics work better than, say, electronics. Social-media services also may struggle to charge influencers and retailers extra fees. Amazon and others are offering shopping features at no additional cost. And competitors may ultimately be their clients. Venture capitalists have invested $700 million, per research outfit Pitchbook, into startups such as Firework that provide such technology to brick-and-mortar retailers.

Network effects will be powerful. On TikTok, a two-hour live shopping event helped one small beauty brand generate the equivalent of a week’s worth of sales at its flagship store. Such anecdotes are what will make e-commerce go viral on Western social media.