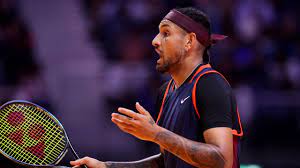 SYDNEY (Reuters): Australia’s Nick Kyrgios has withdrawn from the inaugural edition of the United Cup due to injury, organisers of the new mixed team event said on Wednesday.

Kyrgios, who is ranked 22nd in the world and reached this year’s Wimbledon final, was set to lead Australia in the joint ATP and WTA event, which is being held in Sydney, Brisbane and Perth and offers ranking points and $15 million in prize-money.

“Nick Kyrgios has withdrawn from the United Cup due to injury,” organisers said in a statement without elaborating on the nature of the injury.

Kyrgios, 27, had been due to face Britain’s Cameron Norrie in his first singles match on Thursday in Group D, which also features Rafa Nadal’s Spain.

The tournament, which runs from Dec 29-Jan 8, features 18 countries split into six groups of three, with teams playing two men’s and two women’s singles matches and a mixed doubles match.