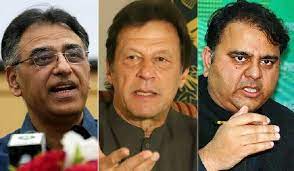 ISLAMABAD (INP): The Election Commission of Pakistan (ECP) on Tuesday issued bailable arrest warrants for PTI chairman Imran Khan and party leaders Fawad Chaudhry and Asad Umar in cases related to the contempt of the electoral body.
The order was passed by a four-member ECP bench headed by member Nisar Durrani. The ECP had in August and September last year issued notices, in exercise of its powers of contempt, to Imran, Umar, Chaudhry, Mian Shabbir Ismail and Danial Khalid Khokhar for allegedly using intemperate language against Chief Election Commissioner Sikander Sultan Raja and the electoral watchdog.
Party leaders have repeatedly bashed the commission and Raja over what they claim is their partisanship and frequently pillory the electoral body as a “subsidiary of the PML-N”. At the previous hearing, the ECP had given the PTI leaders a last chance to appear before the commission, warning that their absence before the commission at the next hearing on January 17 would result in the issuance of arrest warrants.
During the hearing on Tuesday, the ECP rejected the pleas of PTI leaders seeking an exemption from appearing before the commission and issued arrest warrants for them against surety bonds worth Rs50,000 each. The bench, subsequently, adjourned the hearing till Jan 17. Reacting to the development, PTI Leader Asad Umar tweeted that the ECP, instead of fulfilling its responsibilities, had indulged in such actions. “They themselves are guilty of contempt of court by not holding Islamabad elections,” he said. Fawad Chaudhry said he would file contempt of court proceedings against the electoral watchdog.
“The case was supposed to be heard on Jan 17 but it was fixed today in violation of the rules. This is another biased verdict issued by the ECP members,” he added. Meanwhile, PTI lawyer Babar Awan claimed that the ECP was being used to run a campaign against Imran. “They are just trying to somehow disqualify him. But let me tell you, this minus-one formula won’t work on Imran Khan,” he told reporters outside a court in Islamabad.
Meanwhile, senior leaders of PTI, Fawad Chaudhry and Asad Umar on Tuesday expressed their dismay with the Election Commission of Pakistan (ECP) as they called it out for its bias.
The condemnation by both leaders came hours after the ECP’s decision to issue bailable arrest warrants for PTI chief Imran Khan and other senior party leaders, Asad Umar and Fawad Chaudhry, for failing to appear before the commission in contempt proceedings. The ECP had initiated contempt proceedings against Imran as well as Umar and Fawad for constantly issuing statements against the electoral body and its chief election commissioner.