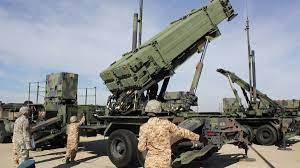 WASHINGTON (AFP): The United States will train Ukrainian personnel at a base in the state of Oklahoma on how to use and maintain the advanced Patriot air defense system that Washington is providing to Kyiv, the Pentagon announced on Tuesday.

Washington promised a Patriot battery to Ukraine at the end of last year to help counter relentless aerial attacks by Moscow — a significant victory for Kyiv, which had repeatedly pushed the United States for the system.

“The training will prepare approximately 90 to 100 Ukrainian soldiers to operate, maintain and sustain the defensive system over a training course expected to last several months,” Ryder said.

“Once fielded, the Patriot will… contribute to Ukraine’s air defense capabilities and provide another capability to Ukrainian people to defend themselves against Russia’s ongoing aerial assaults,” he added.

Air defenses have played a key role in protecting Ukraine from strikes and preventing Moscow’s forces from gaining control of the skies.

But as Russia faced increasing setbacks on the ground, it began systematically targeting critical infrastructure in Ukraine in attacks that have disrupted electricity, water and heat to millions of people.

Made by Raytheon, the MIM-104 Patriot is a surface-to-air missile (SAM) system initially developed to intercept high-flying aircraft.

It was modified in the 1980s to focus on the new threat of tactical ballistic missiles, and was first used in combat against Iraq’s Russian-made Scuds in the first Gulf War.

Patriot has been proven effective in Saudi Arabia against Iranian-designed ballistic missiles fired from Yemen, and primary contractor Raytheon says the system has intercepted more than 150 ballistic missiles in combat since 2015.

The goal of Ukraine’s international supporters is to build multi-layer air defenses for the country consisting of low-, medium- and high-altitude systems that can protect against a variety of threats.

Canadian Prime Minister Justin Trudeau on Tuesday said his government would purchase a US air defense system to donate to Ukraine.

The announcement was made after a bilateral meeting between Trudeau and US President Joe Biden in Mexico City.

“Canada will continue to stand with the Ukrainian people as they fight against Russia’s illegal and unjustifiable invasion,” Anand tweeted.

“Thank you for helping us to protect our sky. NASAMS procured for us by Canada will be a strong shield for our cities and citizens,” Zelensky tweeted.

The donation is in addition to the armored vehicles, artillery, ammunition, drone cameras and winter clothing that Canada has already provided to Ukraine to repel the Russian invasion.

Several other countries have delivered air defense systems to Kiev, including the United States, Norway, Spain, Germany and France.

The NASAMS defense system has proven highly successful in protecting against drone, missile and aircraft attack.