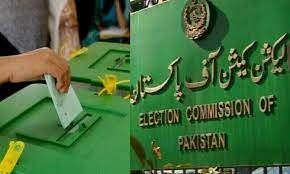 ISLAMABAD: The Election Commission of Pakistan (ECP) is likely to release the schedule for by-polls on 35 National Assembly (NA) vacated by PTI lawmakers next week.

According to sources, the ECP has decided to hold by-polls on 35 NA seats and schedule for by-elections will be released next week. The decision was taken in an ECP meeting held in Islamabad, say sources. The Election Commission of Pakistan (ECP) recently denotified 35 Members of the National Assembly (MNAs) of the Pakistan Tehreek-e-Insaf (PTI) after the NA speaker accepted their resignations.