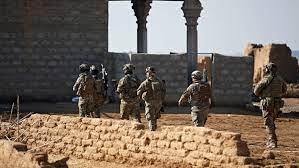 There was no immediate claim for the attack but the village was a focus of resistance to the Daesh group during its lightning advance through swathes of Iraq and neighboring Syria in 2014.

It came a day after Daesh extremists killed nine federal police in an ambush in Kirkuk province further north.

“A group of terrorists on motorbikes attacked the village of Albu Bali from three sides,” the mayor of the district center Al-Khalis, Odai Al-Khadran, told Iraq’s official INA news agency.

“The village is inhabited by farmers… dozens of residents mobilized to defend against the terrorist attack,” he said, adding that eight had been killed and three wounded.

An interior ministry official, who asked not to be identified, blamed IS for the attack, recalling that villagers had formed a paramilitary group to defend their land against the jihadists in 2014.

The defense ministry said it had sent a high-ranking delegation to Diyala province “to throw light on the circumstance of the criminal action.”

Daesh extremists seized large areas of Iraq and Syria in 2014, declaring a “caliphate” which they ruled with brutality before their defeat in late 2017 by Iraqi forces backed by a US-led military coalition.

IS lost its last Syrian bastion, near the Iraqi border, in 2019.

Despite the setbacks, which have left Daesh a shadow of its former self, the group can still call on an underground network of between 6,000 and 10,000 fighters to carry out attacks on both sides of the porous border, a UN report said earlier this year.