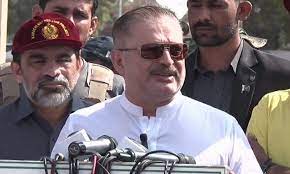 KARACHI: Sindh Minister for Information, Transport and Mass Transit Sharjeel Inam Memon on Tuesday announced that electric taxi service will be launched soon in Karachi under Sindh Mass Transit Authority and it is agreed in principle in meeting held today that taxi service will be launched in two phases with fleet of Blue and Pink Taxi . He said that Pink Taxi will be reserved for women only.

The minister announced this while talking to media at Sindh Assembly media corner. PPP member of Sindh Assembly Syed Zulifiqar Ali Shah also present. The minister said that in first phase Pink Taxi Service for women  will be launched and lady captains will hired to drive pink taxi service and it’s fare would be between Rs. 200 to 500 He added that proper monitoring system including cameras will be installed in taxi service for safety of the passengers. The minister said that on the directives of Chairman Bilawal Bhutto Zardari, public transport system is being modernized in the province. He said that  BRT orange line is functional and it is being redesigned to integrate it with the green line. He said that people’s bus service has been successfully running it’s operations in Karachi, Larkana, Hyderabad and at the end of December, it will be launched in Sukkur city. He said that first electric bus service will also be launched soon in Karachi and negotiations on the agreement with operators are in final phase. He said that BRT Yellow Line will start soon and it’s construction will commence with construction of bridge alongwith the Jam Sadiq bridge will also start soon as international bidding process has been started and traffic police had been directed to divert the heavy traffic on the bridge.

He called traffic a serious issue in the city and JICA has conducted a study on Karachi traffic in 2011.  He added that a lebonese company has been tasked to conduct new study on traffic and it is under way.

He added that MQM Pakistan is our coalition partner in center and we have agreed points and we talk in parameters of agreed issues. He said that they did take Waseem Akhtar’s statements seriously. Waseem Akhtar has not raised such issues in any meeting.  Whether he (Waseem Akhtar) had given statement with the permission of his leadership. He said that Waseem Akhtar might have given such statement in context of upcoming local bodies elections so as to revive their reputation in the public and to activate their workers. He said that law and order situation in Karachi is much better than past. He said that now no one can close down the city on 10 minutes strike call. Extortion and dead bodies in sakes stopped. No one can set the buses on fire.  He added that crime rates in metropolitan cities remains high throughout the world but this doesn’t mean that he was defending it. He added that Karachi is a safe city and for better than law and order situation in Peshawar , Quetta and Lahore  . The minister said that Sindh government had allocated 100 percent funds in the budget for the safe city project. The work is underway on the project. He added police is trying to contain the street crime in the city.

He said that PTI is in state of chaos, fear and panic. PTI’s own Chief Minister Punjab has called PTI chief ‘ selfish and thankless ‘ but astonishly no leader of PTI had condemned it. He said that Imran Khan has not spared his patrons, what will he do for the people.

Trans Karachi Board of directors meeting:

Provincial Minister for Information, Transport and Mass Transit and Chairman Trans Karachi has said that all projects should be completed on time, so that the cost does not escalate, as burden of cost increase falls on the government treasury. The provincial minister said this while presiding over the 22nd Board of Directors meeting of Trans Karachi at his office.  He said that people are facing severe problems on University Road, we are trying to complete this project soon. The provincial minister asked the administrator Karachi to resolve the land issue for the construction of the BRT Red Line bus depots. On which the administrator Karachi Dr. Saifur Rahman told the board that 10 acres for the construction of the bus depots has been reserved and allocated at allaudin park .