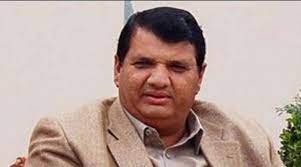 The advisor shared his views while talking to a delegation of Young Media volunteers who called on him here at the office of National Heritage and Culture Division.

Adviser to PM stressed that youth and especially media volunteers must keep on exposing lies of Imran Niazi.

Adviser to Prime Minister said that the youth media volunteers are an asset of Pakistan Muslim League (PML-Nawaz).

He expressed the hope that the youth would continue to expose the lies of Imran Niazi and promote the truth.

Engr. Amir Muqam said that Pakistan Muslim League N would take all possible steps for the welfare and empowerment of youth in the country as per the vision of Quaid Mian Nawaz Sharif. The delegation was comprised of youth media activitists from across the country including Azad Jammu Kashmir and Giglit-Baltistan. Media coordinator, Engr. Arif Rawan was also present on the occasion.