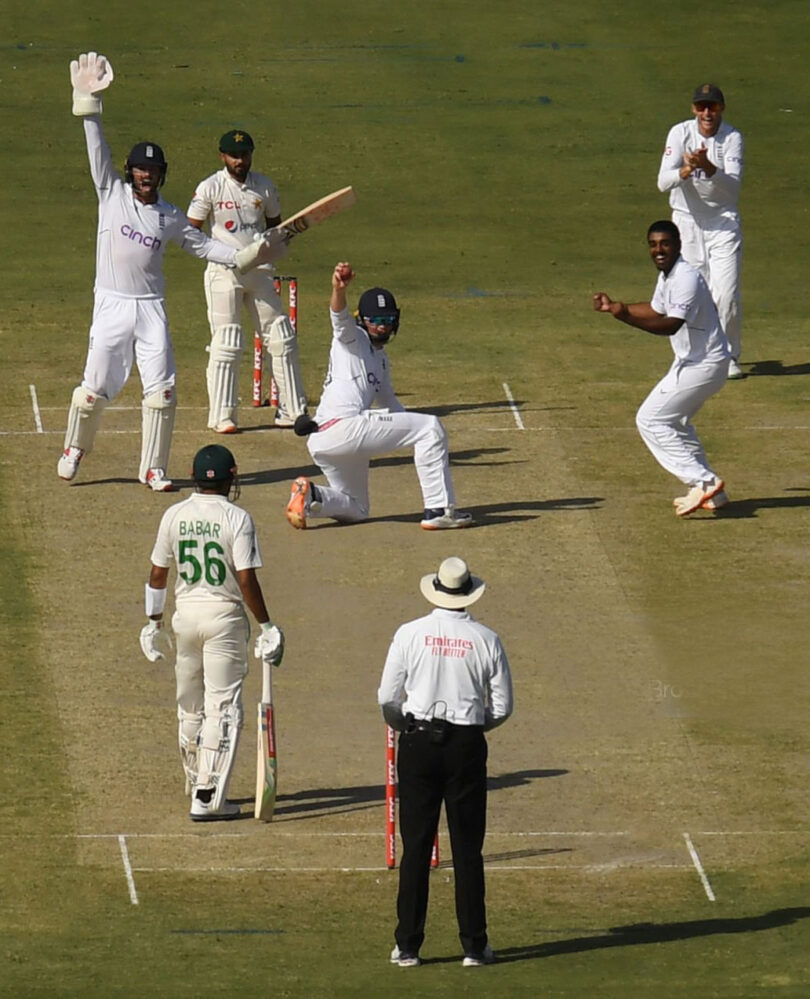 KARACHI: Spinners Jack Leach and teenager Rehan Ahmed shared six wickets between them as England dismissed Pakistan for 304 on Saturday on the opening day of the third and final Test in Karachi.

Leach grabbed four for 140 and Ahmed finished with two for 89 as Pakistan batters spoiled good starts after Babar Azam won the toss and batted on a turning National Bank Cricket Arena pitch.

But England also fell prey to spin, with mystery spinner Abrar Ahmed trapping Zak Crawley without scoring before the visitors closed the day on seven for one.

Ben Duckett and Ollie Pope were at the crease with four and three, respectively as England trail by 297 runs.

Skipper Babar Azam top-scored for Pakistan with 78 before running himself out in the post-tea session, while Salman Ali Agha made 56.
But the start of the day belonged to Rehan Ahmed — who at 18 years and 126 days old became the youngest England player to start a Test — when he dismissed Saud Shakeel for 23 in his seventh over.

Before Ahmed, Brian Close was the youngest England debutant at 18 years and 149 days when he played against New Zealand in 1949. Leach then came into the act, breaking a stubborn eighth wicket stand of 48 between Salman and Nauman Ali (20).

Ahmed, who was presented the Test cap by former England skipper Nasser Hussain in front of father Naeem, described the moment as ‘great’. “It was probably the best moment,” said Ahmed. “It’s great to be part of it. I believe in myself and try to do my best when given an opportunity.

“They (England players) backed me the whole day and I couldn’t ask for more. To play at such a young age is a blessing. It’s the best feeling in my life.”

Pakistan’s head coach Saqlain Mushtaq, also a great spinner in his days, praised Ahmed. “It was a very impressive performance considering it was his first game. He is a young chap and he has a lot of potential and looks a very good prospect for England team.” Saqlain thought his team fell short by 60-70 runs.

“It’s not a bad total, some 60-70 would have been better, but we have to play disciplined cricket to restrict them because I think the pitch will get slower by the day.”

In the morning session, Pakistan lost Abdullah Shafique (eight), Shan Masood (30) and Azhar Ali (45) before Babar and Saud looked to have steadied the innings with a 45-run fourth wicket stand.

But Ahmed had Saud caught off a defensive shot at short-leg before Babar was adjudged run-out by wicketkeeper Ben Foakes after a lengthy review.

Babar, who hit nine boundaries, also added 71 for the third wicket with Azhar.

Azhar — playing his last Test — fell at the stroke of lunch when he gloved a catch to a diving Foakes off pacer Ollie Robinson. Sensing the pitch would take spin, England started the attack with Leach, who trapped Shafique leg-before in the sixth over of the day.

Leach becomes the first spinner to share the new ball in the first innings of a Test for England in 101 years — Jack White did the same against Australia at Leeds in 1921. Shan fell to the trap of short bowling as he pulled fast bowler Mark Wood straight into the hands of deep fine-leg fielder Leach. Shan hit five boundaries while Azhar had six hits to the ropes.

Pakistan made four changes from the second-Test line-up, while England made two, bringing in Foakes and Ahmed.