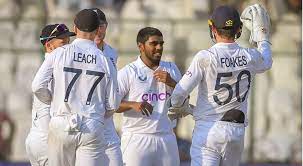 KARACHI: England needed 167 runs to complete whitewash against Pakistan in the third and final cricket Test being played in Karachi.

England need 167 runs to win the third and final Test after dismissing Pakistan for 216 in their second innings on the third day in Karachi on Monday.

Teenage leg-spinner Rehan Ahmed finished with 5-48 and Jack Leach with 3-72 as Pakistan lost their last seven wickets for 52 on a spin-assisted National Stadium pitch.

If England win the match it will be the first time that Pakistan will be whitewashed 3-0 on their home grounds.

England won the first Test by 74 runs in Rawalpindi and the second in Multan by 26 runs.

Earlier, Pakistan’s top-order stalwart Azhar Ali failed to score in his final Test innings on Monday as England spinner Jack Leach swung the balance of the final Test in Karachi in the space of six balls.

Leach sent Pakistan’s top three batter back to the pavilion and kept alive England’s chances of securing a historic series sweep with the hosts wobbling at 99-3.

Pakistan started the fourth day on nearly even footing, with openers Abdullah Shafique and Shan Masood looking set and erasing England’s 50-run lead without the loss of a wicket.

But Leach bowled Shan — attempting an ill-advised reverse sweep — for 24 and then knocked over Azhar’s stumps four balls later.

On the first ball of his next over, Leach had Shafique lbw after the batsman misread a delivery that barely turned, leaving the hosts at 54-3.

Captain Babar Azam (13) and Saud Shakeel (28) resisted the English attack and steered their side through the rest of the first session.

But Pakistan will find a 49-run lead for the cost of three key wickets hard to digest over lunch, especially with a first-ever 3-0 whitewash at home still on the cards.

England won the first Test in Rawalpindi by 74 runs and a close-fought second match in Multan by 26.

Azhar was beaten by spin as he played a forward push on the final ball of Leach’s momentum-changing double-wicket maiden. His stumps shattered, Azhar walked off the field for the last time, ending a storied 12-year Test career.

The England players clapped as Azhar trudged back to the dressing room, while Pakistan’s players raised their bats at the boundary for a ceremonial guard of honour.

Among the handful of spectators were Azhar’s wife and two sons.