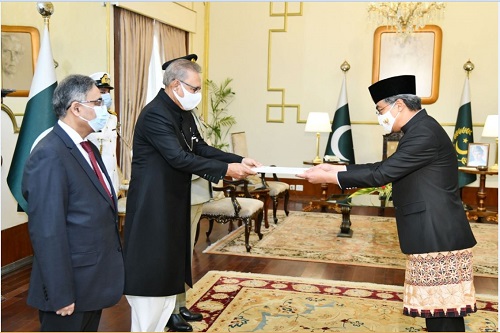 ISLAMABAD (APP): The newly appointed envoys of Canada, Austria, Syria, Serbia, and the Slovak Republic on Tuesday presented their credentials to President Dr Arif Alvi in the Presentation of Credentials Ceremony here.
Later, High Commissioner of Canada Leslie Scanlon, Ambassador of Austria Andrea Wicke, Ambassador of Syria, Dr Ramez Alraee, non-Resident Ambassador Serbia Dragan Todorovic, and non-Resident Ambassador of Slovak Republic Ladislav Ballek also separately called on the president.
Talking to the Canadian ambassador, the president highlighted that there was great economic potential in Pakistan, a market of 220 million people, and investment opportunities.He said that the Canadian businesses should be encouraged to explore the opportunities available in Pakistan. He said that the resolution of the Reko-Diq project was a positive development, and expressed the hope that it would encourage further Canadian investment in Pakistan.
The president stated that Pakistan and Canada enjoyed cordial and friendly relations and that Pakistan looked forward to greater bilateral cooperation in the areas of the economy, commerce, and investment.Welcoming the Austrian ambassador, the president said that Pakistan attached high importance to its relations with Austria, both bilaterally and in the context of the European Union. He informed that Pakistan’s investment regime was very liberal, and the Austrian companies should benefit from it and consider making investments in the Special Economic Zones being set up all over the country.
He said that Pakistan offered significant opportunities for investment in the fields of hydropower, railways, communication, renewable energy, and waste management technologies.
President Alvi said that there were ample opportunities for cooperation in start-ups and information technology sectors, and expressed hope that the two countries work towards enhancing cooperation in these fields.
He also urged the need to further enhance bilateral trade and economic cooperation, adding that the true potential of bilateral trade was still unrealized. He noted that Austria had remained supportive of Pakistan’s GSP+ status and that the country looked forward to Austria’s continued support towards the successful completion of the ongoing 4th biennial review and for the new GSP Plus Scheme post-2023.
The president underscored that Pakistan would like to work together with its international partners, including Austria, to address the global issue of climate change.
He expressed gratitude to the government and the people of Austria for providing Euro 2 million in humanitarian assistance for the flood victims in Pakistan. Talking to the Syrian ambassador to Pakistan, the president urged the need for regular contact between the two countries at different tiers of leadership in order to further cement cordial relations.
He said that Pakistan’s relations with Syria were multi-faceted and deep-rooted and that cultural, religious, and historical ties bound the people of the two countries.
He appreciated the friendly gesture by the Syrian government to open group visas for Pakistani pilgrims and commended the decision taken by the airlines of both countries to operate direct flights between Karachi and Damascus. While talking to the non-resident ambassador of Serbia, the president said that both countries needed to work diligently to strengthen their bilateral economic and trade relations in order to bring them to par with the actual trade potential.
He further highlighted that Pakistan offered tremendous opportunities for investment and cooperation in the fields of hydropower, communication, higher and technical education, industrial and commercial interaction, renewable energy, information technology, circular economy and waste management technologies.
President Alvi further said that Pakistan, having a population of over 220 million, was an ideal market to hire skilled and semi-skilled workers, which the Serbian corporate sector could utilize. “Skilled youth from Pakistan can help the construction sector which is presently booming in Serbia”, he added.
The president thanked the Serbian side for agreeing to support Pakistan’s candidature for the Council of International Maritime Organization and Commission on the Limits of Continental Shelf (CLCS).
Talking to the non-resident ambassador of the Slovak Republic, the president expressed the hope that the envoy would be able to contribute towards expanding bilateral ties between the two countries.
He noted with satisfaction that the ministries of foreign affairs of both countries had set up a mechanism for Bilateral Political Consultations, which would provide a good opportunity to review the overall relationship and take new initiatives.
The president further said that the investment policies of Pakistan were very liberal, and urged the ambassador to persuade the Government of Slovakia and businesses to take advantage of them.
He suggested that bilateral cooperation and investment in a variety of sectors, including the automobile industry, machinery, energy, construction, infrastructure, agriculture, electric industry, tourism and food processing. President Alvi also highlighted that Pakistan’s start-up and information technology sector was expanding very fast, and urged the ambassador to meet the concerned people in this regard.
He also informed that Pakistan had also established Special Economic Zones and that Slovak investors were welcome to invest in them.
He also noted that GSP Plus had played an important role in the growth of trade between Pakistan and the EU countries and that Pakistan looked forward to Slovakia’s continued support towards the successful completion of the ongoing 4th biennial review and for the new GSP Plus Scheme post-2023.