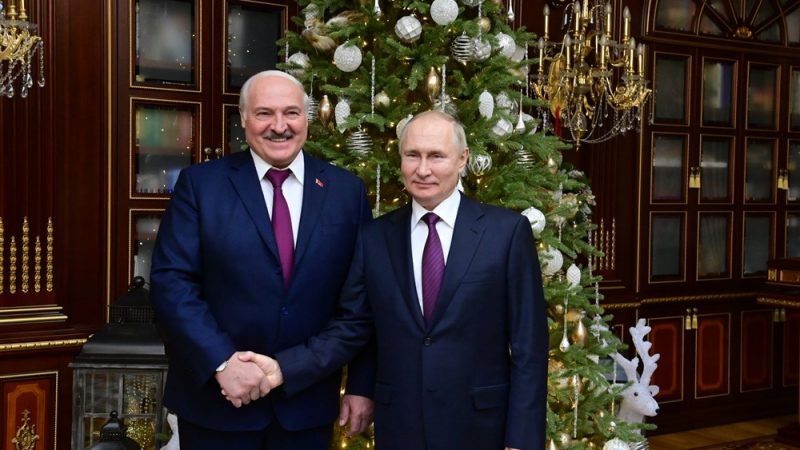 KYIV (AFP/APP): President Vladimir Putin denied plans to absorb Belarus as he paid a rare visit Monday to the country whose strongman assisted his invasion of neighbouring Ukraine.
Putin flew into Minsk with his defence and foreign ministers in tow, hours after Russian forces launched a swarm of attack drones at critical infrastructure in Kyiv, which provoked emergency blackouts in a dozen regions.
Putin said that Russia and Belarus — slapped with new Western sanctions since President Alexander Lukashenko was declared the winner of a sixth term in 2020 elections widely criticised as fraudulent — were “united by a common history and spiritual values”. Putin called the countries “closest allies and strategic partners” but said that rumours that Russia sought to take over Belarus came from “ill-wishers”.
“Russia has no interest in absorbing anyone, this would simply make no sense,” Putin said.
In Washington, State Department spokesman Ned Price scoffed at Putin’s remarks.
“I think a statement like that has to be treated as the height of irony coming from a leader who is seeking at the present moment — right now — to violently absorb his other, peaceful next-door neighbour,” Price said.
“We have seen the Lukashenko regime essentially cede its sovereignty — cede its independence — to Russia,” Price said.
Belarus has let Russian forces use its territory and hours before Putin touched down in Minsk, Moscow released footage of drills with Belarusian forces including tank manoeuvres and sniper fire at a snow-dusted training ground.
Lukashenko urged closer military cooperation and said that Russia and Belarus are “open for dialogue with other states, including European ones.” “I hope that soon they will listen to the voice of reason,” Lukashenko said. Speculation mounted ahead of the Russian leader’s visit that he would pressure Lukashenko to send troops to Ukraine to fight alongside the Russians after Moscow suffered a string of defeats in nearly 10 months of fighting. Kremlin spokesman Dmitry Peskov, however, dismissed the reports “as totally stupid, groundless fabrications.”
In October, Belarus announced the formation of a joint regional force with Moscow with several thousand Russian servicemen arriving in the ex-Soviet country. The drone attacks wounded three people near Kyiv. They came as Russia said it shot down several US-made missiles over its airspace near Ukraine. “I first heard the air raid siren… I thought there is going to be a drone attack. For the first time, it scared me,” said Natalia Dobrovolska, a 68-year-old resident of Kyiv.
She described hearing multiple explosions before power shut off in her building in western Kyiv. Officials said Russia had flown in 35 attack drones nationwide, including 23 over Kyiv.
Ukraine said it downed 30 of the aerial weapons, including Iranian-made “Shaheds”, which have pummelled the capital in recent weeks.
Mayor Vitali Klitschko said critical infrastructure facilities were damaged while regional authorities said nine homes had been scarred by the attacks.
Ukraine has experienced frequent and deadly aerial attacks. After a series of battlefield setbacks, Moscow stepped up its aerial campaign to target the country’s energy grid.
– Russia ‘must fail’ –
With winter setting in, missile and drone attacks have plunged cities around the country into darkness, and severed water and heat supplies to millions of Ukrainians.
Speaking to the leaders of several NATO countries via video link on Monday, President Volodymyr Zelensky urged Ukraine’s allies to supply its military with more weapons.
“Russian aggression can and must fail. And our task now is to accelerate it,” he told the leaders assembled in Riga.
He said in a late-night address Sunday that some nine million of Ukraine’s estimated 40 million people had their electricity restored after Russia’s previous missile barrage last week.
UN Secretary-General Antonio Guterres, in a year-end news conference, said with regret that he expected the war “will go on.”
“I am not optimistic about the possibility of effective peace talks in the immediate future,” Guterres said.
– Gas price cap –
The West has sought to keep the pressure on Russia. European Union ministers, after months of wrangling, on Monday decided on a price gap on Russian natural gas, following an agreement that came in force this month on Russian oil.
The price ceiling on natural gas was fixed at 180 euros per megawatt hour, although the European Commission said it may suspend the cap if “the risks outweigh the benefits” following protracted negotiations involving Germany, the continent’s largest economy which backs Ukraine but is highly dependent on imported energy.
“It wasn’t an easy thing to achieve,” Maltese Energy Minister Miriam Dalli said.
The Kremlin lashed out at the latest measure, with Peskov saying the cap was “unacceptable” and a violation of market processes.