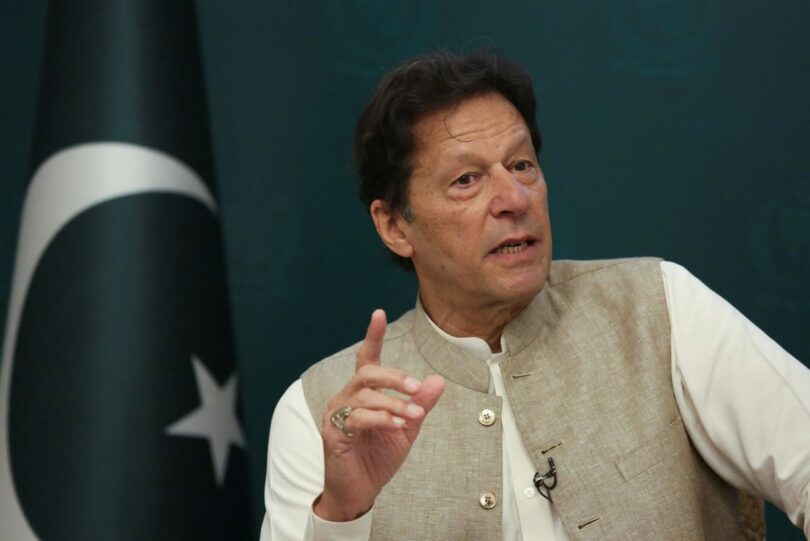 LAHORE (INP): Former prime minister and Pakistan Tehreek-e-Insaf (PTI) chairman Imran Khan said Friday that the establishment is not acting neutral on the vote of confidence for Punjab Chief Minister (CM) Pervaiz Elahi.
Talking to a delegation of court reporters in Lahore today, Imran Khan said that PTI and its allies are preparing for the vote of confidence if the court issues such an order to the Punjab CM. He alleged that the establishment is seemingly not acting neutral on the vote of confidence. “Our people are being approached and so far, three MPAs have informed us about being contacted.” The PTI chief claimed that the MPAs are being asked to ditch Punjab CM in the vote of confidence.
Khan said that PTI and Pakistan Muslim League Quaid (PML-Q) are political allies and Pervaiz Elahi has his own stance regarding former army chief General Retd Qamar Javed Bajwa. He said that Pervaiz Elahi cannot ask PTI leadership to change its stance. Khan clarified once again that his political party is not fighting the establishment but struggling to get justice.
The PTI chief told the court reporters that no dialogues will be held with the ‘thieves’. He vowed that PTI will immediately organise local government (LG) polls after coming into power. He reiterated his allegations against the former army chief and said that Gen Retd Bajwa did not consider corruption wrongdoing and all corruption cases were dissolved.
Commenting on the horse trading ahead of the vote of confidence, he said that turncoats will not get any support from the nationals anymore. Imran Khan said that PTI will not step back from its narrative and they will continue to expose those people who are the reason for crisis in the country. The delegation of the court reporters includes Abid Khan, Ibadul Haq, Zainul Abideen, Abdul Rehman, Muhammad Waqas, Arshad Ali, Muhammad Ashfaq Salman Awan, Shakir Awan and Faisal Khan.