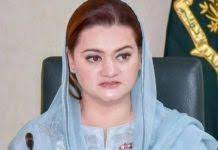 F.P. Report
ISLAMABAD: Minister for Information and Broadcasting Marriyum Aurangzeb Friday said in the era of modern technology, largest Virtual Studio of Pakistan Television would help in bridging the tech gap.
This she said while inaugurating the Virtual Studio of PTV along with Minister for Power Division Khurram Dastgir. The minister said that Pakistan Television had the required assets but there was need to use them in the best way. Today, with the efforts of PTV staff and management, IT solutions were being used in PTV, which was a requirement of the modern age, she said.
“The establishment of Virtual Studio is another milestone for Pakistan Television which has the distinction of being the largest virtual studio in Pakistan, she said. She said that now the PTV News will now work in a modern way, providing accurate news to the viewers. Pakistan Television’s state-of-the-art virtual set will present national, regional and international news as well as weather and sports news and current affairs programs to the public in an innovative manner, she said.
Pakistan Television has achieved many milestones during its 58-year journey. With its largest Virtual Studio, Pakistan Television News will now keep the public updated with news, analysis and real views of Pakistan in a modern way. With the establishment of Virtual Studio, viewers of PTV News would be able to learn about national, regional news, politics, culture, education, current affairs and world affairs in a modern way.
The minister said that best audios, high definition videos, beautiful graphics and PTV News will be part of the screen. Secretary Information and Broadcasting Shahira Shahid, MD PTV Sohail Ali Khan and Chairman Pakistan Electronic Media Regulatory Authority Saleem Baig were also present on the occasion of the inauguration.