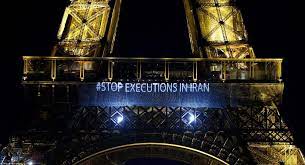 Iran’s protesters have long moved beyond the issue of dress code to demand fundamental freedoms and human rights. Europe must adjust its response in light of the regime’s continued crackdown.

The new year began in Iran as the old one ended: with executions. 2023 promises to be even more consequential than 2022, which has already shaken the foundations of the Islamic Republic. It’s time for Europe to change course in response.

Adebahr is a nonresident fellow at Carnegie Europe. His research focuses on foreign and security policy, in particular regarding Iran and the Persian Gulf, on European and transatlantic affairs, and on citizens’ engagement.

Two men were hanged on January 7, 2023, after sham trials found them guilty of killing a member of the Basij militia during street protests in Karaj, a city near Tehran, two months earlier. Mohammad Mehdi Karami and Mohammad Hosseini, a karate champion and a volunteer children’s coach, respectively, suffered the same fate as Mohsen Shekari and Majidreza Rahnavard, who were hanged in December 2022 for an alleged similar offense.

The goal of such state-sanctioned revenge killings is clear: to intimidate the protesters into submission. And while actual demonstrations have somewhat ebbed due to the regime’s brutal crackdown, the clocks cannot be turned back. What is uncertain is whether the country will experience the positive change people have clamored—and died—for, or whether there will be even more unrest.

Three news bits from the past days illustrate what has already changed in Iran—and why this is relevant for Europe and the rest of the world.

For one, the Supreme Leader Ali Khamenei has been quoted as saying that women should not be ostracized for failing to properly cover their hair, as religious rules and the laws of the Islamic Republic demand. This only goes to show how removed Iran’s leaders are from their people: after four months of revolt caused by the slaying of Mahsa Jina Amini for what Khamenei would now call “weak hijab,” this concession is found wanting.

Those protesting have long moved past the issue of dress code and the pervasive discrimination of women to demand fundamental freedoms and basic human rights. As it happens, these cannot be achieved through long-denied reforms within the Islamic Republic, but only through a change of the system. As if to underscore this insight, Khamenei has just appointed another hardliner as chief of the national police force, unfailingly commending the outgoing commander for his eight-year-long service.

Second, news emerged of another execution, this time of a former deputy defense minister accused of spying for the British MI6 (Secret Intelligence Service). Ali Reza Akbari, who held dual British-Iranian citizenship, was arrested already in 2019 but only now convicted of espionage and executed shortly thereafter.

While it appears superficially ironic that the regime now also devours its own, the unexpected verdict may in fact point to a power struggle within the elite. Several insiders have in recent weeks argued in favor of more substantial reforms to address the protesters’ grievances, among them former parliamentary speaker Ali Larijani, his successor Mohammed Baqer Qalibaf, and the Secretary of the Supreme National Security Council Ali Shamkhani. During his career, Akbari had close connections with all three of them, so some observers see his punishment as a thinly veiled warning to those figures higher up in the establishment.

Finally, Iran’s support for Russia’s war against Ukraine appears to enter a new stage if reports about plans for a drone production site in the West Russian city of Tolyatti are confirmed. It was quite an embarrassment for the United States as chief sanctions enforcer to learn that Iranian attack drones raining on Ukrainian cities were largely made of components manufactured by U.S. companies.

With no end to the war in sight even as it approaches its one-year mark, an October 2023 deadline for the end of a UN weapons embargo against Iran now suddenly starts to loom large on policymakers’ horizons. Based on the UN Security Council resolution endorsing the 2015 nuclear deal, from then onward Tehran will again be allowed to export short-range ballistic missiles. All things remaining equal, Moscow looks set to be Iran’s first customer.

In that sense, the outcome of Iran’s internal struggle as well as the regime’s positioning with regard to Russia could have serious consequences for the unfolding of the war in Ukraine. Will the West be pressed to support Kyiv with battle tanks to achieve a favorable outcome before the UN embargo lapses? Will it, conversely, try to convince the Ukrainians to settle for a ceasefire by the summer to avoid such escalation? Or will Israel with its new extreme-right, Iran-obsessed government finally come around to supporting Ukraine with its prized defense system, the Iron Dome?

Such are the developments—inside the regime as well as in its relations with international partners—that set the stage for Europe’s wider confrontation with Iran this year. They only add to Iran’s steady but stealthy advancements in uranium enrichment, which constitute a grave nuclear proliferation risk and which the International Atomic Energy Agency is less and less able to monitor. At a time when reporting on the revolt has receded from the headlines and even those executions produce only short-lived outrage around the globe, such undercurrents are important to watch.

After years of focusing mainly on the nuclear threat emanating from Iran, and now months of desperately trying to respond to both the courage of those protesting for “women, life, freedom” and the regime’s brutal crackdown, the EU must finally come up with a comprehensive approach to Iran and the region.

Things may turn good, bad, or ugly in Iran. The only certain thing is that yesterday’s strategy won’t do.