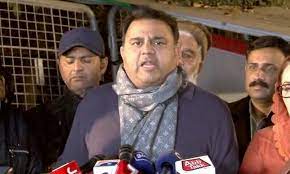 LAHORE: Pakistan Tehreek-e-Insaf (PTI) central leader Fawad Hussain Chaudhry said the Khyber Pakhtunkhwa (KP) Assembly will be dissolved after the dissolution of the Punjab Assembly as the advice to dissolve the JP Assembly has been prepared.

According to reports, the former federal minister held a media talk outside the PTI chairman Imran Khan’s Zaman Park residence in Lahore on Friday.

Fawad Chaudhry said after the dissolution of the Punjab Assembly, the order to dissolve the KP Assembly will be issued immediately.

The PTI leader said the KP Chief Minister and the cabinet members had a telephone conversation on the matter.

About the Punjab Governor’s statement to take two days to decide the dissolution of the Punjab Assembly on the advice of CM Pervez Elahi, Fawad said Baligh-ur-Rehman should not wait for 48 hours and must dissolve the assembly immediately.

To a query, Fawad Chaudhry hinted that President Arif Alvi can ask Prime Minister Shehbaz Sharif to take a vote of confidence but the time for this move will be decided by the President himself.