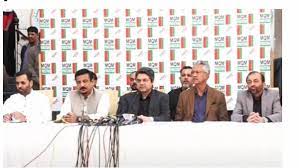 KARACHI: The Muttahida Qaumi Movement (MQM) while refusing to accept the Election Commission of Pakistan (ECP)’s decision has said the local government elections in Karachi and Hyderabad cannot be held until new delimitations.

Addressing a press conference after holding an emergent meeting of the MQM Rabita (Coordination) Committee in Karachi on Friday, MQM leader Senator Farogh Naseem said MQM will not boycott the election. “If despite our concerns, the elections do take place, then we will not accept the results of the elections,” he added.

He said the ECP decided to hold LG polls in Karachi and Hyderabad by using the “provision of Section 9” of the constitution. “Section 9 is not applicable for an order issued under Section 10(1),” he argued.

The former law minister said the ECP has no jurisdiction in Section 10 (1). Terming the election authority’s order “void”, Naseem said the LB polls would not have legal status.

The constituencies where the MQM-P has vote banks consist of 90,000 people and the others have just 20,000 population, he claimed, adding that it was “injustice” with the populace.

Through the delimitations, the MQM-P vote bank has been downsized by three times, Naseem said and termed it “pre-poll rigging”.

“More voters have been placed in the UCs where MQM has its vote bank.”

Farogh Naseem said that MQM had challenged the demarcation of constituencies in court and ECP on time (Dec 2021).

MQM leader Faisal Sabzwari said it has been observed in the Nazimabad, Korangi and Orangi Town constituencies that these areas have more population as compared to seats.  “Some areas have less population and more seats; how will the elections be transparent?”

He said MQM doubted the transparency of elections following the discrepancies within constituencies. “There was no census in the city for the last 20 years.”

He said that the population of Karachi should be calculated correctly,

The committee meeting was held under the chairmanship of MQM chief Khalid Maqbool Siddiqui. Mustafa Kamal, Anees Qaim Khani, Farooq Sattar, Waseem Akhtar, Khawaja Izhar and members of the coordination committee were present in the meeting.

Pertinent to mention, the Election Commission has decided to complete the second phase of the local body elections in the province on January 15, while rejecting the decision of the Sindh government.